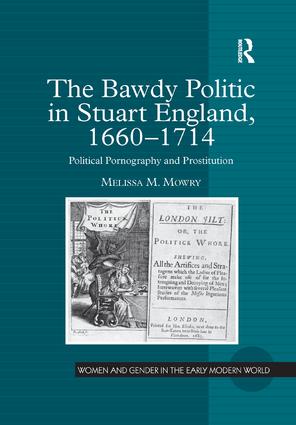 With this original study, Melissa Mowry makes a strong contribution to a provocative interdisciplinary conversation about an important and influential sub genre: seventeenth-century political pornography. This book further advances our understanding of pornography's importance in seventeenth-century England by extending its investigation beyond the realm of cultural rhetoric into the realm of cultural practice. In addition to the satires which previous scholars have discussed in this context, Mowry brings to light hitherto unexamined pornographies as well as archival texts that reveal the ways in which the satires helped shape the social policies endured by prostitutes and bawds. Her study includes substantial archival evidence of prostitution from the Middlesex Sessions and the Bridewell Courtbooks. Mowry argues that Stuart partisans cultivated representations of bawds and prostitutes because polemicists saw the public sale of sex as republicanism's ideological apotheosis. Sex work, partisans repeatedly asserted, inherently disrupted ancestral systems of property transfer and distribution in favour of personal ownership, while the republican belief that all men owned the labour of their body achieved a nightmarish incarnation in the prostitute's understanding that the sexual favours she performed were labour. The prostitute's body thus emerged in the loyalist imagination as the epitome of the democratic body politic. Carefully grounded in original research, The Bawdy Politic in Stuart England, 1660-1714 is a cultural study with broad implications for the way we understand the historical constructions and legal deployments of women's sexuality.

'This deeply learned, clearly-written book examines the cultural function of political pornography by exploring how the bawd and the prostitute figure as the denigrated representatives of mass political participation in the period as well as how this figuration relates to what we can learn about historical women who were bawds and prostitutes. Mowry's distinctive focus and argument, and her careful grounding in original research, distinguish The Bawdy Politic from other scholarship on the topic. This book will contribute to our understanding of the histories of women, of sexuality, and of pornography, as well as of political rhetoric and its resources both in the past and today. The book will also make an important contribution to discussions about women's relationship to the emerging public sphere.' Frances E. Dolan, Professor of English, University of California-Davis 'This is a fascinating study of how the distopic vision of pornographic pamphlets and broadsides”particularly their representation of a monstrous bawdy politic governed by common women�”provided fodder for anti-democratic politics of the late seventeenth century. Mowry’s sophisticated reading of political pornography in relation to legal discourses and practices contributes not only to a consideration of the gendered dimensions of liberalism and the public sphere, but to our understanding prostitution as a sexual identity.' Valerie Traub, Professor of English and Women’s Studies, University of Michigan 'Meticulously researched and richly detailed… Mowry widely consults and deftly engages with literary and historical scholarship on her subject, and her original research encompasses previously overlooked satires… A worthwhile read, The Bawdy Politic offers much to literary critics and historians interested in the politics and pornography of the late Stuart era. Learned, provocative and exhaustively detailed in its presentation of historical evidence, Mowry's study moves scholarship

Contents: Preface; The Bawdy politic: Restoration political pornography and the common law; The specter of corporate identity and 1668; Monstrous mothers: property and the common law; Jades at Livery and other prostitutes; A citizen's duty and 'common justice'; Coda; Bibliography; Index.