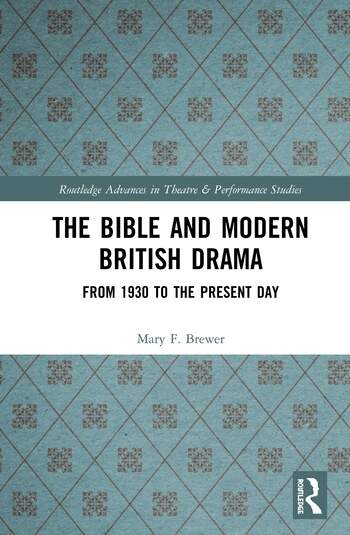 The Bible and Modern British Drama: From 1930 to the Present Day

The Bible and Modern British Drama: 1930 to the Present Day is the first full-length study to explore how playwrights in the modern period have adapted popular biblical stories, such as Abraham and Isaac, Moses and the Exodus from Egypt, and the life and death of Jesus, for the stage.

The book offers detailed and accessible interpretations of the work of well-known dramatists such as Christopher Fry, Howard Brenton, and Steven Berkoff, alongside the work of writers whose plays have been neglected in recent criticism, such as James Bridie and Laurence Housman. The drama is analysed within the context of changes in religious belief and practice over the course of the modern period in Britain, comparing plays that approach the Bible from a traditional religious perspective with those that offer alternative viewpoints on the text, including the voices of gay, feminist, black, Jewish, and Muslim dramatists. In doing so, the author offers a broad and in-depth exploration that is grounded in current scholarship, ranging from the past to present, across boundaries of race and gender.

Ideal for students, researchers, and general readers interested in understanding how the Bible has served as an important source text for British playwrights in the twentieth and twenty-first centuries, The Bible and Modern British Drama shows how Bible-based drama has been influential in creating and disseminating ideas of what constitutes a "good" life, both on an individual and social level.

Mary F. Brewer is a Senior Lecturer in the School of Social Sciences and Humanities at Loughborough University, where she teaches English and American literature and drama.