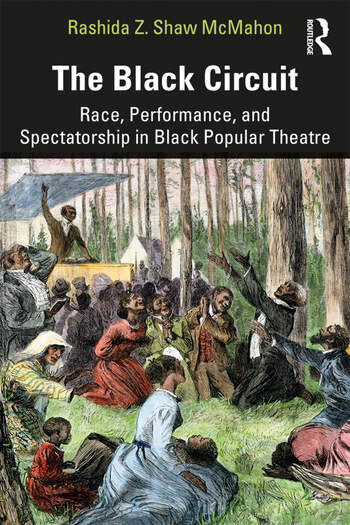 The Black Circuit: Race, Performance, and Spectatorship in Black Popular Theatre presents the first book-length study of Chitlin Circuit theatre, the most popular and controversial form of Black theatre to exist outside the purview of Broadway since the 1980s. Through historical and sociological research, Rashida Z. Shaw McMahon links the fraught racial histories in American slave plantations and early African American cuisine to the performance sites of nineteenth-century minstrelsy, early-twentieth-century vaudeville, and mid-twentieth-century gospel musicals. The Black Circuit traces this rise of a Black theatrical popular culture that exemplifies W. E. B. Du Bois’s 1926 parameters of "for us, near us, by us, and about us," with critical differences that, McMahon argues, complicate our understanding of performance and spectatorship in African American theatre. McMahon shows how an integrated and evolving network of consumerism, culture, circulation, exchange, ideologies, and meaning making has emerged in the performance environments of Chitlin Circuit theatre that is reflective of the broader influences at play in acts of minority spectatorship. She labels this network the Black Circuit.

Rashida Z. Shaw McMahon is an Assistant Professor of English and Affiliated Faculty of African American Studies at Wesleyan University. Her research uses interdisciplinary methodologies and collaborative approaches toward examining the dramatic and performance traditions of Africa and the African diaspora. Professor Shaw McMahon is originally from the island of St. Croix in the US Virgin Islands.

Rashida Shaw McMahon’s exhaustive investigation of the history and ongoing appeal of the theatrical “Chitlin Circuit” sheds light on a crucial component of contemporary Black popular culture that continues to be ignored by most scholars. In her masterful movement across time, geographies, and source materials, she offers an unparalleled gift and resource to African American Studies and Performance Studies.

Rashida Z. Shaw McMahon provides a first-hand, comprehensive history of the "Chitlin Circuit", or what the author calls the "Black Circuit", a popular entertainment potpourri consisting of drama, comedy, gospel music, Christian faith, family, romance, melodrama, hair salons, barber shops, and vaudeville. Methodically researched, The Black Circuit illuminates the plays, performers, and audience responses rooted in the African American cultural experience. Building on the theme of “Chitlins," an African American "soul food” that slaves cooked primarily from swine leftovers, McMahon tracks the development of this eclectic genre, from artists like Langston Hughes to notable contemporaries Tyler Perry, David Talbert, the team of Johnson and Guidry, and many others. This groundbreaking work will be the standard study of this unique subject for years to come.

Rashida McMahon ambitiously takes on the challenge of chronicling and conveying Black theatrical pleasure in “the Chitlin Circuit,” deftly nuancing black performance and reception, beyond easy scripts. Using rigorous methods and analyses, The Black Circuit taps into an original, rich, and dynamic archive of performances—to tell a beautifully complex story of another side of black theatre history and world-making.

Whether you call it the “Chitlin’ Circuit,” the “Urban Theater Circuit,” or, as Rashida Z. Shaw McMahon does in her important and timely book, the "Black Circuit," you will want to know all that she can tell you and more about this effervescent scene of African-American popular entertainment.

The Black Circuit is the first sustained examination of “Chitlin Circuit” theatre, best exemplified, perhaps, by Tyler Perry and “Madea.” Rashida Z. Shaw McMahon skillfully debunks accusations that this theatre simply recycles stereotypes to unsophisticated, African American audiences willing to ignore low production values. Instead she unearths historical links not only to poet Langston Hughes’ gospel plays of the 1950s but, equally importantly, to the sermonic and other performative strategies crafted over centuries by the Black Church. Indeed, the reader sees how this theatre offers a secular Christianity, steeped in contemporary popular culture yet aimed at enabling spectators to surmount, with grace, challenges facing black communities.

A smart, sophisticated blend of ethnography, cultural criticism, and historical writing. The Black Circuit spotlights one of the most important but critically overlooked branches of contemporary American theatre: independently produced urban circuit Black theatre a.k.a “the Chitlin’ Circuit.” Examining the works of Tyler Perry among numerous other innovative theatre artists, Rashida Shaw McMahon explores the past and present, politics and economics, and the dynamic live experience of this massively popular genre.