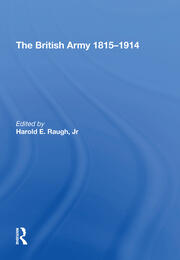 This collection of essays examines the evolution of the British Army during the century-long Pax Britannica, from the time Wellington considered its soldiers 'the scum of the earth' to the height of the imperial epoch, when they were highly-respected 'soldiers of the Queen'. The British Army during this period was a microcosm and reflection of the larger British society. As a result, this study of the British Army focuses on its character and composition, its officers and men, efforts to improve its efficiency and effectiveness and its role and performance on active service while an instrument of British Government policy.