The British Defence of Egypt, 1935-40
Conflict and Crisis in the Eastern Mediterranean 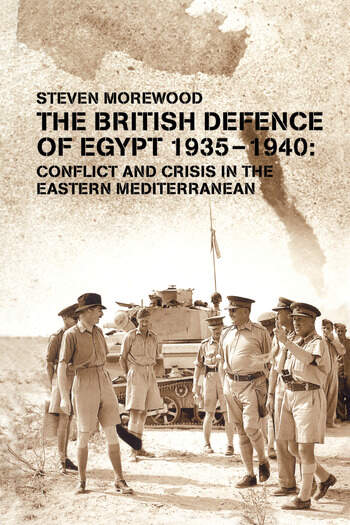 The British Defence of Egypt, 1935-40: Conflict and Crisis in the Eastern Mediterranean

A comprehensive and challenging analysis of the British defence of Egypt, primarily against fascist Italy, in the critical lead-up period to the Second World War.

Culminating in the decisive defeat of the Italian military threat at Sidi Barrani in December 1940, this is a fascinating new contribution to the field. The security of Egypt, a constant of British imperial strategy, is a curiously neglected dimension of the still burning appeasement debate.

Steven Morewood adds to the originality of his interpretation by suggesting the old view should be reinstated: that Mussolini should and could have been stopped in his empire-building at the Abyssinian hurdle. Thereafter, as Nazi Germany tore the Versailles peace settlement to shreds, the drift to war accelerated as British resolve and credibility were brought into question. The fascist dictators in Rome and Berlin held no respect for weakness and Mussolini became the conduit through which Hitler could apply pressure to a sensitive British interest through reinforcing Libya at critical moments.

Acknowledgements Preface Erik Goldstein 1. Introduction: Defending Egypt in the Era of Appeasement The Lingering Strategic Significance of Egypt: The appeasement debate and egypt 2. The Nature of the Italian Threat to Egypt : Sir Miles Lampson and the Security of Egypt: The Decision - Making Process. I The Defence of Egypt in the Interwar Period: Strategic Imperatives and Rationale No Surrender - The Role of Egypt in Imperial Defence. II The Defence of Egypt and the Onset of the Italo-Abyssinian Emergency The Emergence of the Italian Threat - The Origins of the Italo-Abyssinian Crisis: the Egyptian Dimension - The British Response to the Growing Abyssinian Crisis - The Position in Egypt - Countdown to War. III Defending Egypt during the Italo-Abyssinian Emergency: First Phase, August - December 1935 Policy Imperatives and Dilemmas - Preparations for War - A Clash of Attitudes: The Men on the Spot and the Chiefs of Staff - The Imperial Defence Dimension and the Hoare-Laval Pact. IV Defending Egypt during the Italo-Abyssinian Emergency: Second Phase, January - July 1936 The Capacity to Defend the Egyptian Power Base - Too Far Too Fast - An Oil Embargo: So near and yet so far - The Suez Canal Closure Issue - The End of the Emergency. V The Making of the 1936 Anglo-Egyptian Treaty of Friendship and Alliance: The Military Aspects Early Efforts to Conclude a Treaty, 1924-1930 - Commencing Negotiations - The Negotiations: First Phase - The Negotiations: Middle Phase - The Negotiations: Final Phase - An Assessment. VI Securing an Exposed Flank: The Defence of Egypt through Diplomacy, June 1936-April 1938 The Debate over the Way Forward - Defence Planning Priorities and Egypt - Assessing the Italian Threat - From Eden's Resignation to the Easter Pact. VII 'Bloodless War' Prelude to the Munich Agreement - The Mediterranean Dimension of the Munich Crisis - The Aftermath - Bloodless War Begins - Preparing for War - Improving the Intelligence Picture. VIII The Approach of War in the Mediterranean A Summer of Tension - Anglo-French Incongruity - Preparing for Battle - War Comes Closer - The Onset of War. IX Implementing the Treaty of Friendship and Alliance: Anglo-Egyptian Relations, 1937-1940 Implementing the Treaty: Immediate Achievements and Complications - A Changed Leadership - Munich and After - The Power Struggle in Egypt - The Lead Up to War in Europe - Egypt Stays Out - The Lead Up to War in the Mediterranean - The Removal of Ali Maher. X The Suez Canal and the Defence of the Far East, 1919-1941 The Origins of the Suez Canal Defence Plan - The Suez Canal Defence Plan - The Suez Canal Defence Plan and Interwar Crises 1937-1939 - The Advent of War in the Mediterranean - The Canal at War - Italo - German - Japanese Motives for Closing Suez. XII Conclusion Bibliography Index

Steven Morewood is a lecturer in international history in the School of Historical Studies at the University of Birmingham.

"It has been twenty years since Steven Morewood wrote his first-rate thesis on the defence of Egypt and it is to be welcomed that he and Routledge should now publish it, in a revised form, amalgamating and adding chapters to bring it up to the outbreak of war in the Mediterranean in 1940." - Saul Kelly, King's College London

'The British Defence of Egypt

is an important read for anyone interested in the origins of World War II.'--NYMAS Review