The British Officer
Leading the Army from 1660 to the present 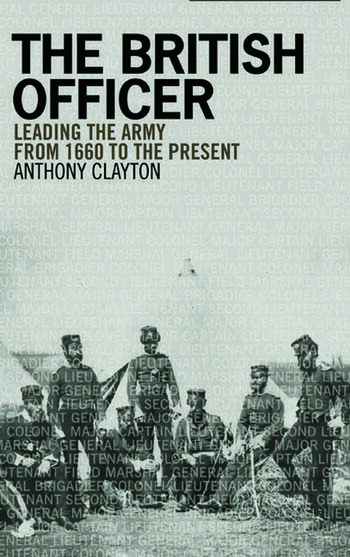 The British Officer: Leading the Army from 1660 to the present

An Army officer must lead men into frightening and dangerous situations and sometimes make them do things that they never thought they could do. This book recounts how British officers have led their men, and commanded their respect, from the days of Marlborough to the Second Iraq war of 2003. Anthony Clayton explores who the officers, men and now women, have been and are, where they came from, what ideals or traditions have motivated them, and their own perceptions of themselves. His account tells the fascinating story of how the role of the military officer evolved, illustrated by a selection of captivating images, and the personal memoirs, biographies and autobiographies of officers.

1.Introduction - The History of a Profession

2. The Officer in the Restoration Army

3. The Officer in the Armies of the Later Stuarts

5. The Officer in the Era of Wellington

6. The Officer from Waterloo to the Crimea

7. Crimea and the Indian Mutiny

11. The Regular Officer Between The Two World Wars

13. The Officer in the First Post-War Years

14. From Aden to Belfast and Basra

16. The Officers of the Support Services

Anthony Clayton is a lecturer at the University of Surrey and was a Senior Lecturer at the R.M.A. Sandhurst. He was a Lieutenant-Colonel in the Territorial Army and is holder of the French Chevalier dans l’Ordre des Palmes Académiques. He is author of a number of books including Paths of Glory: The French Army, 1914-18 (2003), The Wars of French Decolonisation (1994), The British Empire As a Superpower 1919-39 (1986) and France, Soldiers and Africa (1988).

"Clayton's book is a useful starting point for any student of the British army and its leaders."
– Keith Surridge, Independent Scholar