The Business of Europe is Politics
Business Opportunity, Economic Nationalism and the Decaying Atlantic Alliance 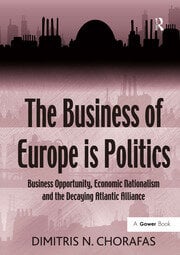 The Business of Europe is Politics: Business Opportunity, Economic Nationalism and the Decaying Atlantic Alliance

It is no secret that Europe is currently undergoing a major economic and social crisis, so it is essential says Dimitris Chorafas that leaders of industry and finance within the EU, or doing business with the EU, know what is going on. What is it that threatens competitiveness and produces obstacles to providing a vibrant business landscape in the European Union? This book offers insight into the particular nature of the European cocktail of business and politics, explaining how that bears on trade and relations between, for example, continental Europe and the UK, across the Atlantic with the US, with Russia and with Asia. Dr Chorafas explains and critiques Europe's conflicting aims and what he describes as its wanting business plan. Case studies to illustrate the consequences for business of the deficiencies identified are included. With its mix of rigorously researched background and forthright argument, this timely book will satisfy those academics with an interest in the issues addressed and will also serve as a planning tool for business leaders and government executives trying to determine what they can do at enterprise level. The challenge is to survive and prosper in an environment where 'business is politics'.

Contents: Preface; Part 1 The EU's Cocktail of Business and Politics: Beyond the European Union's 50th birthday; Britain, America, Russia and the EU; The business of Europe is politics; Declinismé in the EU: a case study on France. Part 2 The EU's Conflicting Aims and Inadequate Business Practices: Politicians, managers and Parliamentarians of the EU; The EU's constitution and constitutional referendums; Perils of the EU's enlargement. Part 3 The EU's Economic Nationalism: Business opportunity? Take it or leave it; The European Union's economic nationalism; Case studies on economic nationalism; The European aeronautics defence and space industrial giant. Part 4 The Decline of the Atlantic Alliance: Useful as feathers on a fish; Energy supplies and new alliances. Epilogue: the 2010 Greek financial drama; Index.

Professor Dr Dimitris N. Chorafas is an academic and consultant. He is a member of the New York Academy of Sciences and visiting faculty to the Ecole Polytechnique Federale de Lausanne (EPFL). Dr Chorafas is an engineering graduate of the National Technical University of Athens and of UCLA, and a Doctor of Science (in maths and logic) from the Sorbonne. He has been a Fulbright Scholar and has taught in 10 universities around the world. During his career, Dr Chorafas has been a consultant to the board of UBS, Bank of Scotland, Commerzbank, Istituto Bancario Italiano, Credito Commerciale, Banca Provinciale Lombarda, First Austrian Bank, Italcementi, AEG-Telefunken, Osram, GE Bull, and a number of other companies. Over 8,000 executives around the world have attended his seminar programme. In 1992, in conjunction with the Swiss Academies of Sciences, he established his Foundation which grants awards to the best PhD students at 25 universities worldwide. Dr Chorafas has authored 160 books on engineering, mathematics, banking and finance, his most recent being the highly acclaimed 'Globalization's Limits' (Gower, 2009).

’With its mix of rigorously researched background and forthright argument, this timely book will satisfy those academics with an interest in the isues addressed and will also serve as a planning tool for business leaders and government executives trying to determine what they can do at enterprise level. The challenge is to survive and prosper in an environment where "business is politics."’ - Christos Ladias, SEEJE (South-Eastern Europe Journal of Economics)