The CIO's Guide to Oracle Products and Solutions 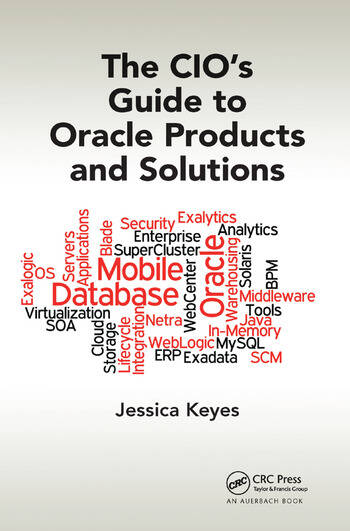 The CIO's Guide to Oracle Products and Solutions

From operating systems to the cloud, Oracle’s products and services are everywhere, and it has the market share to prove it. Given the share diversity of the Oracle product line, and the level of complexity of integration, management can be quite a daunting task.

Supplying both conceptual and technical views, the text focuses on what CIOs need to do to orient, or reorient, their organization toward the use of Oracle products and services. It describes how to develop a strategic framework for the use of these products and services rather than the specific product or service itself. This strategic framework will help you to prepare, educate, keep up with change, mitigate risk, and implement with the confidence needed to succeed.

Providing an overview of the suite of Oracle technologies and solutions, the book covers the heart of the Oracle products set, including Oracle analytics, enterprise performance management, Oracle cloud, data management, application development, social business, and fusion. It examines compliance and security issues and includes metrics to help you evaluate potential solutions.

The book also provides readers with access to a set of helpful resources on the book’s page at www.crcpress.com, including cloud procurement best practices, cloud migration tips, a sample project procurement plan template, and various glossaries.

Jessica Keyes is president of New Art Technologies, Inc., a high-technology and management consultancy and development firm started in New York in 1989.

Keyes has given seminars for such prestigious universities as Carnegie Mellon, Boston University, University of Illinois, James Madison University, and San Francisco State University. She is a frequent keynote speaker on the topics of competitive strategy, productivity, and quality. She is a former adviser for DataPro, McGraw-Hill’s computer research arm, as well as a member of the Sprint Business Council. Keyes is also a founding board of director member of the New York Software Industry Association. She completed a two-year term on the Mayor of New York City’s Small Business Advisory Council. She currently facilitates doctoral and other courses for the University of Phoenix and the University of Liverpool. She has been the editor for WGL’s (Warren, Gorham & Lamont) Handbook of eBusiness and CRC Press’s Systems Development Management and Information Management.

Prior to founding New Art, Keyes was managing director of R&D for the New York Stock Exchange and has been an officer with Swiss Bank Co. and Banker’s Trust, both in New York City. She holds a Masters of Business Administration from New York University and a doctorate in management.

A noted columnist and correspondent with over 200 articles published, Keyes is the author of the following books: