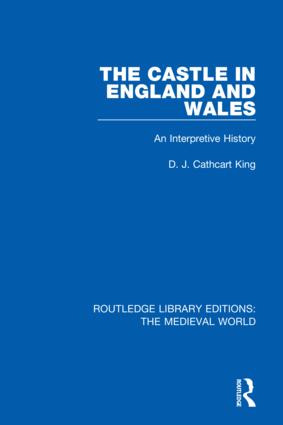 The Castle in England and Wales

Originally published in 1988, The Castles in England and Wales is a comprehensive treatment of the archaeology of the castles in England and Wales. The books looks at how following the Norman Conquest, one of the most characteristic structures of the English landscape, the castle, was used to control and survey the population. In its simplest definition a castle is a fortified habitation, however this book looks at the many uses of castles, from their most primitive kind, intended only for periodic use, or as magnificent decoration, such as Caernarvon and other Welsh castles of Edward I. It is essential reading for all archaeologists and historians alike.

1 The Character of a Castle

3. Control Over Castles, at Home and Abroad

4. On the Development of Castles

5. The Origins of the Castle

8. The Influence of the Crusades

9. The Introduction of Scientific Fortifications

10. The Thirteenth and Early Fourteenth Centuries

11. The Castles of the Welsh

Appendix: A Note on Keeps

The volumes in this set, originally published between 1938 and 1994, draw together research by leading academics in the area of medieval history and medieval literature, and provide a rigorous examination of related key issues. The volume examines medieval history from the early Middle Ages, right up until the Reformation, as well as the effect of the medieval period on later cultures, such as the Victorians. This collection draws together books on the monarchy, medieval philosophy, religion, art, music, psychology and architecture as well as volumes on medieval archeology. The collection also brings together key volumes on medieval literature of the period, with formative works examining medieval religious literature, medieval legends and oral tradition. The collection also includes titles examining specific poems from the period such as Piers Plowman, Sir Gawain and the Green Knight and The Pearl, as well as volumes on influential writers of the period such as Jean Froissant, John Lydgate and Margery Kempe. This collection brings back into print a collection of insightful and detailed books on the diverse medieval period and will be a must have resource for academics and students, not only of history and literature, but of anthropology, music, psychology and religion.