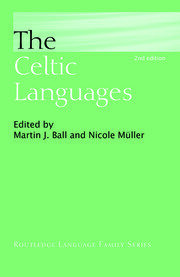 The Celtic Languages describes in depth all the Celtic languages from historical, structural and sociolinguistic perspectives with individual chapters on Irish, Scottish Gaelic, Manx, Welsh, Breton and Cornish.

This second edition has been thoroughly revised to provide a comprehensive and up-to-date account of the modern Celtic languages and their current sociolinguistic status along with complete descriptions of the historical languages.

This comprehensive volume is arranged in four parts. The first part offers a description of the typological aspects of the Celtic languages followed by a scene setting historical account of the emergence of these languages. Chapters devoted to Continental Celtic, Old and Middle Irish, and Old and Middle Welsh follow. Parts two and three are devoted to linguistic descriptions of the contemporary languages. Part two has chapters on Irish, Scots Gaelic and Manx, while Part three covers Welsh, Breton and Cornish. Part four is devoted to the sociolinguistic situation of the four contemporary Celtic languages and a final chapter describes the status of the two revived languages Cornish and Manx.

With contributions from a variety of scholars of the highest reputation, The Celtic Languages continues to be an invaluable tool for both students and teachers of linguistics, especially those with an interest in typology, language universals and the unique sociolinguistic position which the Celtic languages occupy.

Dr Martin J. Ball is Hawthorne-BoRSF Endowed Professor, and Director of the Hawthorne Research Center, at the University of Louisiana at Lafayette. Dr Ball has over 120 academic publications. Among his books are The Use of Welsh, Mutation in Welsh, and Welsh Phonetics.

Dr Nicole Müller is Hawthorne-BoRSF Endowed Professor at the University of Louisiana at Lafayette. Among her books are Mutation in Welsh, and Agents in Early Irish and Early Welsh.

Martin J. Ball is Hawthorne-BORSF Endowed Professor, and Head of the Department of Communicative Disorders, and Director of the Doris B. Hawthorne Center for Special Education and Communication Disorders at the University of Louisiana at Lafayette. He is an Honorary Fellow of the Royal College of Speech and Language Therapists (London). Dr Ball has authored and edited twenty books, over 20 contributions to collections and over thirty refereed articles in academic journals. He is co-editor of the journal Clinical Linguistics and Phonetics. His main research interests include clinical phonetics and phonology, and the linguistics of Welsh. He is currently President of the International Clinical Phonetics and Linguistics Association.

Nicole Müller is Associate Professor in Communicative Disorders at the University of Louisiana at Lafayette, and also holds a Hawthorne- BORSF professorship. Dr Müller has published widely in both book and journal form in various areas of language disorders, as well the syntax and semantics of natural language. Particular areas of interest include historical and comparative Celtic linguistics, clinical discourse studies and pragmatics, specifically as applied to Alzheimer’s Disease, communication disorders and multilingualism, and professional voice use in university professors.

"This is an impressive and important collection of work about the Celtic language
family. It has something for everyone, from historical linguistics to phonology
to language policy. Any serious Celticist needs to have this close to hand." - Linguist List