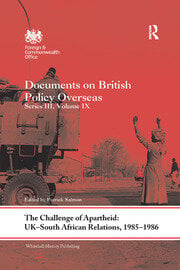 This volume examines diplomatic relations between the United Kingdom and South Africa during one of the most turbulent periods of the apartheid era.

The crisis of apartheid that began in 1984 provoked international outrage on an unprecedented scale. This volume documents the attempt by the British Government to formulate a response that would go some way towards meeting demands for action on the part of critics of South Africa in the Commonwealth, the United States and the European Community as well as in the United Kingdom itself, without at the same time inflicting unacceptable damage on Britain’s significant economic interests in South Africa. It was a process marked by frequent disagreements between Prime Minister Margaret Thatcher and the Foreign and Commonwealth Office under Sir Geoffrey Howe. The volume begins with reports of the deepening crisis at the beginning of 1985 and concludes with the Commonwealth Review Meeting in August 1986, one of the lowest of many low points in relations between the British Government and the critics of apartheid. In South Africa, meanwhile, there seemed little hope of progress following the imposition of a national state of emergency, as the confrontation between the Government and its opponents headed for deadlock and the power of the ‘securocrats’ surrounding President Botha became steadily more entrenched. This volume gives a flavour of what it was like to be a British diplomat working for change at that time.

1. The Crisis of Apartheid and the Commonwealth Heads of Government Meeting (CHOGM) in Nassau, January – October 1985

3. The Mission of the Commonwealth Eminent Persons Group, March – June 1986

Patrick Salmon is Chief Historian at the Foreign and Commonwealth Office.