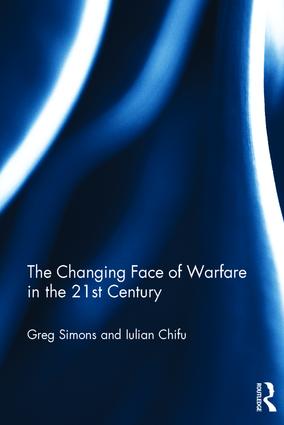 The Changing Face of Warfare in the 21st Century

This study discusses salient trends demonstrated by contemporary warfare of these first years of the 21st century. The authors reinforce previous notions of Fourth Generation Warfare, but most importantly explore the workings of new components and how these have modified the theory and practice of warfare beyond the basic divisions of conventional and unconventional warfare as witnessed in the preceding century. Throughout history there has been a close interaction between politics, communication and armed conflict and a main line of investigation of this book is to track changes that are presumed to have occurred in the way and manner in which armed conflicts are waged.

Using cogent examples drawn variously from conflicts of the Arab Spring, the Islamic State and Russian adventurism in South Ossetia, Crimea and Eastern Ukraine, the authors demonstrate the application of Information Warfare, the practice of Hybrid Warfare, and offensive use of diplomacy, communications, economics and international law to obtain political and military advantages against the status quo states of the international community.

The authors combine a theoretical framework with concrete empirical examples in order to create a better understanding and comprehension of the current events and processes that shape the character of contemporary armed conflicts and how they are informed and perceived in a highly mediatised and politicised world.

"For anyone interested in the relationships between warfare, information, communication and public opinion this is a must read. The book’s great value is that it helps lift the curtain on how informational/psychological warfare is currently deployed in battles over public opinion. This is a timely contribution towards lifting some of the fog of war." - Eric Louw, University of Queensland, Australia.

"I recommend this book for its impressive contributions to news framing of war-related and terrorist events and for its emphasis on hybrid warfare and informational war (such as Russia's "alternative" or 'PsyOp" war)." - Professor Jonathan Matusitz, University of Central Florida, USA.

"Simons and Chifu address the complexities of the contemporary conflict environment, capturing the weakened mainstream media environment and the dramatically increased importance of 'strategic communication' and propaganda activities. The case studies, covering the post 9/11 era are detailed and important contributions to the existing stock of knowledge on media, security and conflict. Essential reading."- Professor Piers Robinson; Chair in Politics, Society and Political Journalism, University of Sheffield.

Chapter 5: Fighting With the Legal Framework and Reaching Military Objectives by Using the Law

Chapter 9: Propaganda and the Information war Against Syria: The Latest War for Peace

Professor Iulian Chifu has been President of the Conflict Prevention and Early Warning Centre Bucharest since 2014. He was Counsellor for Foreign, Security and Defence Policy for the President of the Romanian Chamber of Deputies between 2015 and 2016. He has served as Counsellor of the Romanian Senate since July 2016. Chifu has been Presidential Counsellor for Strategic Affairs and International Security, Romanian Presidency, between 2012 and 2014 and Presidential Counsellor for Strategic Affairs, Security and Foreign Policy between 2011 and 2012. Iulian Chifu is specialised in Conflict Analysis, Crisis Decision-making and Post/Conflict Reconstruction, teaching at the Department of International Relations and European Integration SNSPA, Bucharest (Romania) since 2000. Since 2005, Chifu has been Associate Professor at the National Defence College, Bucharest. Between 2007 and 2008, Mr. Chifu was Associate Professor National Academy for Information, Bucharest. Between 2002 and 2007, he was Scientific Secretary at the Department for International Relations, SNSPA, Bucharest. Moreover, between 2002 and 2005 he was Associate professor at the Centre for NATO Studies, Bucharest.

defended his doctoral dissertation in 2004 at the University of Canterbury (Christchurch, New Zealand) on Ideology, Image-making and the Media in Putin’s Russia. He currently has a number of institutional affiliations as an analyst based at the Centre for Asymmetric Threat Studies (CATS) at the Swedish Defence University, a researcher at the Uppsala Centre for Russian and Eurasian Studies (UCRS) at Uppsala University, and a lecturer based at the Department of Communication Science at Turiba University (Riga, Latvia). His primary research interests include: communicational aspects of the Russian Orthodox Church (Moscow Patriarchate); Russian public diplomacy and notions of soft power; crisis communication; the relationships between politics, information and communication within the context of armed conflict. Dr Simons has participated in conferences and given lectures, researched and published extensively on these issues. He currently runs an undergraduate course at the Department of Peace and Conflict Research (Uppsala University) on Mass Media and Contemporary Armed Conflict.

Colonel Anghel Gabriel gained his PhD in Military Science and Intelligence title, National Defence University "Carol I", Bucharest in 2012. At present he is a senior analyst in the Romanian Ministry of Defence. His research interests include new aspects of hybrid approach in current conflicts, a topic about which he has published and presented at conferences.