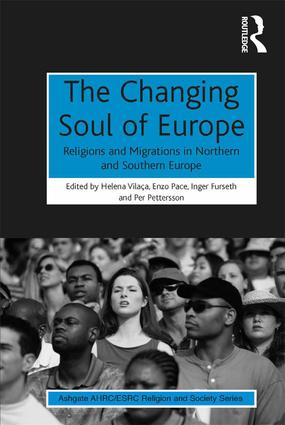 The Changing Soul of Europe

Religions and Migrations in Northern and Southern Europe, 1st Edition

This book paves the way for a more enlarged discussion on religion and migration phenomena in countries of Northern and Southern Europe. From a comparative perspective, these are regions with very different religious traditions and different historical State/Church relations. Although official religion persisted longer in Nordic Protestant countries than in South Mediterranean countries, levels of secularization are higher. In the last decades, both Northern and Southern Europe have received strong flows of newcomers. From this perspective, the book presents through various theoretical lenses and empirical researches the impact mobility and consequent religious transnationalism have on multiple aspects of culture and social life in societies where the religious landscapes are increasingly diverse. The chapters demonstrate that we are dealing with complex scenarios: different contexts of reception, different countries of origin, various ethnicities and religious traditions (Catholics, Orthodox and Evangelical Christians, Muslims, Buddhists). Having become plural spaces, our societies tend to be far more concerned with the issue of social integration rather than with that of social identities reconstruction in society as a whole, often ignoring that today religion manifests itself as a plurality of religions. In short, what are the implications of newcomers for the religious life of Europe and for the redesign of its soul?

’The relevance of The Changing Soul of Europe extends far beyond its stated geographic limits. VilaÃ§a et al. have drawn together a superb collection of essays that together map and explain shifts in the soul of Europe� and which is sure to illuminate similar shifts in other religious landscapes, including Canada, the United States and Australia. Rich in theoretical and empirical insights, this volume is an essential contribution to scholarship on migration, religion and diversity and religion in motion�. The radically new terrain on which we find ourselves in relation to religion requires the creative thinking and genuinely innovative approaches offered in this volume.’ Lori G. Beaman, University of Ottawa, Canada

2 New Economy, Migration and Social Change: The Impact on Religion

4 Migration and Ethno-Religious Identity in Contemporary Greece: The Role of the Orthodox Church

5 How the Portuguese Catholic Church is dealing with Newcomers: The Particular Case of Eastern European Immigrants

7 Ethnic and Religious Diversities in Portugal: The Case of Brazilian Evangelical Immigrants

8 Accommodation and Tension: African Christian Communities and their Swedish Hosts

10 Values and Religion in Transition: A Case Study of a Swedish Multicultural Public School

Helena VilaÃ§a is member of the council of the International Society for the Sociology of Religion, representing Iberia, and her scientific work has been significantly dominated by religion.She is the author of From the Babel Tower to the Promised Lands: Religious Pluralism in Portugal (2006), and Religion in Motion: Migrants and Religious Diversity in Portugal and Italy (2012), edited with Enzo Pace. Enzo Pace is Visiting Professor at the Ecole des Hautes Etudes en Sciences Sociales and Past-President of the International Society for the Sociology of Religion. Recent publications include Islam in Europe (2010); (eds. with H. VILAÃ‡A), Religion as Communication (2011); Il carisma, la fede, la chiesa. Introduzione alla sociologia del cristianesimo, (2012); (ed.) Le religioni nell’Italia che cambia, (2013). Inger Furseth is professor of sociology at University of Oslo and the director of the research program NOREL (The role of religion in the public sphere: A comparative study of the five Nordic countries). Her publications include A Comparative Study of Social and Religious Movements in Norway, 1780s-1905 (2001), From Quest for Truth to Being Oneself (2006), and An Introduction to the Sociology of Religion (2006, with PÃ¥l Repstad). Her research centers on public religion, religious diversity, gender issues, social and religious movements, and social theory. Per Pettersson is guest professor at Uppsala Religion and Society Research Centre - CRS, at Uppsala University (Sweden) and director of CRS ten year long research programme; The Impact of Religion Challenges for Society, Law and Democracy, 2008-2018. He is mainly involved in international comparative research. Recent publications include; State and Religion in Sweden: Ambiguity between Disestablishment and Religious Control (2011); Majority Churches as Agents of European Welfare: A Sociological Approach (in A. BÃ¤ckstrÃ¶m, G. Davie, and N. Edgardh, eds., Welfare and Religion in 21st Century Europe. 2011)

This book series emanates from the largest research programme on religion in Europe today - the AHRC/ESRC Religion and Society Programme which has invested in over seventy-five research projects. Thirty-two separate disciplines are represented looking at religion across the world, many with a contemporary and some with an historical focus. This international, multi-disciplinary and interdisciplinary book series includes monographs, paperback textbooks and edited research collections drawn from this leading research programme.