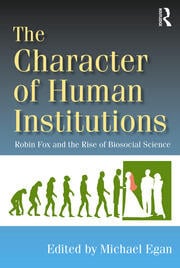 The Character of Human Institutions: Robin Fox and the Rise of Biosocial Science

This collection of essays by seventeen outstanding scientists and scholars celebrates the life and work of Robin Fox, and the idea of a biosocial science. From early studies of kinship, primates, the brain, evolution, the incest taboo and aggression, to later work on literature, politics, civilization, law, the bible, Shakespeare, and the history of ideas, Fox has inspired many with his evolutionary vision of humanity that goes beyond narrow disciplinary boundaries and embraces the “Universal History of Mankind,” including the possible human future. Fox’s work encompasses sociobiology but is not limited by it. He preceded it and is both influenced by it and helped to foster it. But his work represents an independent “biosocial science” stream of thinking that accepts the Darwinian mandate while avoiding reductionism by recognizing culture as a natural phenomenon. His contribution has recently been recognized by election to the National Academy of Sciences.

This book is not only a tribute to one remarkable thinker but a brilliant, entertaining and diverse summary of the state of play in current biosocial science and the thought of those influenced by it across the whole intellectual spectrum. It is that rare academic book where high thinking and good humor share the field, as they do in the life of its honoree.

Michael Egan taught at University of Massachusetts, Amherst and Brigham Young University, Hawaii. He was the editor of The Oxfordian and is the author of eleven books.

“This festschrift, of sorts, for Robin Fox, a major figure in biosocial science and modern anthropology, contains essays by major thinkers in the field, and covers a wide variety of subjects: a fitting tribute to a polymath scientist whose interests and contributions range widely as well. . . . This is a wonderful, sparkling collection of writing on ideas, their history and their importance to society.”

“This work of seventeen outstanding essays is a fitting tribute to Robin Fox, one of the most eminent anthropologists and polymaths of our time, now in his eightieth year.  Fox is a courageous warrior who declared war on mainstream social science almost 50 years ago. He renounced its cultural relativism and ideologically-driven social constructionism that claimed to explain everything, and hence nothing, in his 1971 book (with Lionel Tiger) The Imperial Animal. His clarion call in this and numerous other works calling for investigations into pancultural human nature set me a countless others on the quest for biosocial theory in the social sciences. As this book, and a cascade of other books and articles can attest, he has lived to see his dream come true. Biosocial science has breached the shoddy walls of twentieth century social science and is about to take the castle keep.”

“Robin Fox’s pioneering work on the significance of primate studies for socio-cultural anthropology in the 1970s was deeply inspirational to me. That so many of Robin’s ideas were to be vindicated by subsequent research testifies to the visionary character of his thinking at a time when the primate data base was rather scanty, and attempts to bridge the biological and socio-cultural realms were generally met with skepticism or indifference, at best.”

“Sadly Robin may be one of the last great social anthropologists of our lifetime . . . And it may be a very long time in­deed before we have someone like Robin who masters all of an­thropology, from kinship right on up. This excellent book gives us a taste of such an organism and why it so valuable to have at least one of them around.”