The Citizen and the Chinese State 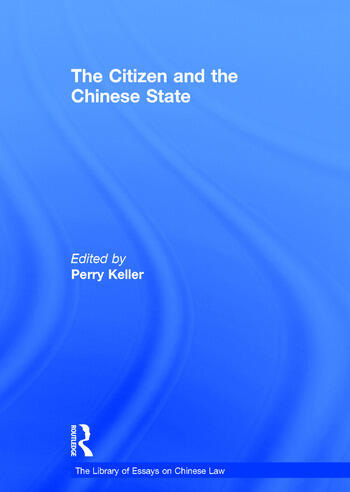 The Citizen and the Chinese State

This volume addresses several core questions regarding the nature of law in China and its future development. In particular, these articles shed light on whether the rule of law ideal is commensurable with government based on the Chinese Communist Party. Beginning virtually from scratch, China has established a comprehensive legal system that boasts a constitution, primary and secondary legislation and plentiful regulations covering most areas of public and private life. Yet, as these articles discuss, its courts are enmeshed in Party and state hierarchies and are not empowered to directly apply constitutional principles or rights, ensuring that the law is subordinate to national public policy goals. Legal and extra-legal methods for punishing wrongdoing and resolving disputes also raise questions of due process of law. Ultimately, the question is therefore whether China's legal system, if eschewing formalised human rights, is developing a capacity to protect fundamental human dignity.

Contents: Introduction; Were Chinese rulers above the law? Toward a theory of the rule of law in China from early times to 1949 CE, Qiang Fang and Roger Des Forges; Constitutionalism with Chinese characteristics? Constitutional development and civil litigation in China, Thomas E. Kellogg; The politics of constitutional reform in China: rule of law as a condition or as a substitute for democracy?, Richard Balme and Yang Lihua; China's legislation law and the making of a more orderly and representative legislative system, Laura Paler; Political parties in China's judiciary, Zhu Suli; China's courts: restricted reform, Benjamin L. Liebman; Who will find the defendant if he stays with his sheep? Justice in rural China, Frank K. Upham; The production of legal norms: a case study of administrative detention in China, Sarah Biddulph; Using law for a righteous purpose: the Sun Zhigang incident and evolving forms of citizen action in the People's Republic of China, Keith J. Hand; Shuanggui and extralegal detention in China, Flora Sapio; When lawyers are prosecuted...: the struggle of a profession in transition, Fu Hualing; Weiquan (rights protection) lawyering in an authoritarian state: building a culture of public-interest lawyering, Hualing Fu and Richard Cullen; Riots and cover-ups: counterproductive control of local agents in China, Carl F. Minzner; Justice from above or below? Popular strategies for resolving grievances in rural China, Ethan Michelson; Public opinion supervision: a case study of media freedom in China, Anne S.Y. Cheung; Name Index.