The City in Russian Culture 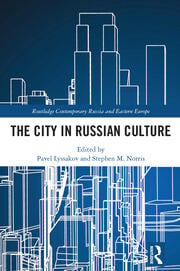 The City in Russian Culture

Cities are constructed and organized by people, and in turn become an important factor in the organization of human life. They are sites of both social encounter and social division and provide for their inhabitants “a sense of place”. This book explores the nature of Russian cities, outlining the role played by various Russian cities over time. It focuses on a range of cities including provincial cities, considering both physical, iconic, created cities, and also cities as represented in films, fiction and other writing. Overall, the book provides a rich picture of the huge variety of Russian cities.

"Space, Culture, and the Russian City"

Part I: The Constructed City

"Siberia’s City on a Hill: Tobol’sk at the Apogee of Empire"

"‘Malorossians Have Come!’ Ukrainian Musicale and the Making of the Russian Imperial City in the Middle Volga"

"Arctic Camp, Arctic City: the Gulag and the Construction of Vorkuta"

"The Paradoxes of Soviet Urbanization: The Search for the Genuine Soviet City"

"Spatial Practices and the Narrative of the Russian City"

"Writing from the Ruins of Europe: Representing Kaliningrad in Russian Literature from Brodsky to Buida"

"The Geo-cultural Images of Sortavala: Poetics of Place in the North Ladoga Region"

"The Rise and Fall of the Creative Capitals: Female Directors on Post-Soviet Urban Space"

Stephen M. Norris is a Professor of History at Miami University, Oxford, Ohio