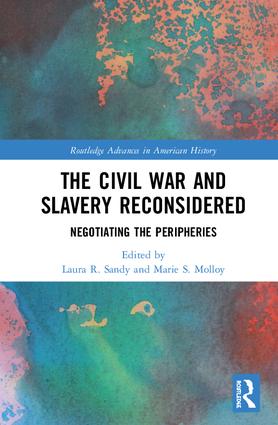 The Civil War and Slavery Reconsidered

Following the suggestion of the historian Peter Parish, these essays probe "the edges" of slavery and the sectional conflict. The authors seek to recover forgotten stories, exceptional cases and contested identities to reveal the forces that shaped America, in the era of "the Long Civil War," c.1830-1877. Offering an unparalleled scope, from the internal politics of southern households to trans-Atlantic propaganda battles, these essays address the fluidity and negotiability of racial and gendered identities, of criminal and transgressive behaviors, of contingent, shifting loyalties and of the hopes of freedom that found expression in refugee camps, court rooms and literary works.

"All of the papers cover topics more or less neglected, often deliberately, by earlier scholars… This is an excellent read for those interested in American social history, slavery, or the Civil War."

Part I: Negotiating Perceptions of Slavery, Civil War and the Confederacy

1. The Republic on Trial or Slavery Under Fire?: International Perspectives on the Nature of America’s Civil War

Part II: A Stable Society?: Transgressive Behaviors and Lives on the Peripheries

4. "Negro Thieves" and Abolitionists: Slave Stealing in Kentucky in the Civil War Era

5. Class, Color and Conflict: Separation and Divorce in Southern White Marriage in the Civil War Era

6. Fashioning Whiteness: Teaching the Ways That Slavery Defined Race Before and After the Civil War

7. "The Contraband’s Death Is More Miserable Than Her Life": Violence, Visibility, and the Medicalization of Freedom in the American Civil War

8. Emancipation in the Dock: The Problems of Freedom in the Reconstruction Courtroom

9. "Let Us Begin Life Anew, and Learn to Live in Earnest!": Free Black Women and the Challenges of Freedom in the Civil War Era

Laura R. Sandy is a lecturer in American history at the University of Liverpool and Co-Director of the Centre for the Study of International Slavery.

Marie S. Molloy is a Lecturer in American History at Manchester Metropolitan University.