The Codification of Criminal Law 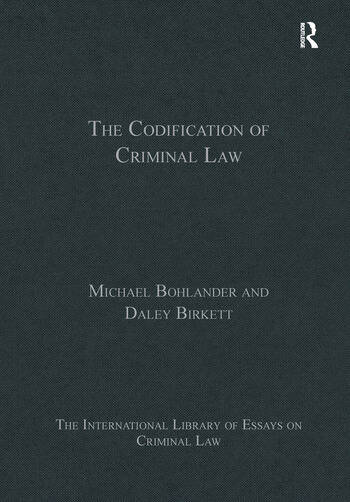 The Codification of Criminal Law

This volume contributes to the codification debate by bringing together research articles which compare and contrast the experience of countries which have a criminal code with those operating a case law system. The articles consider the criticisms that are often made of criminal code systems such as: the implicit restrictions on judicial discretion; the tendency towards inflexibility; the discrepancy that can develop between the theory and the development of the law in practice; and the potential difficulty of a criminal code fitting into a country’s domestic socio-legal culture. The advantages of the case law system are also considered such as reliance on the judiciary for the development of the nation’s criminal law as well as the ability to legislate on the problems of the day by enacting topical laws for distinct subjects. Whereas wholesale codification is a much more accepted phenomenon in the continental law traditions, simplistic transplants from one legal tradition can result in systemic frictions and other anomalies which may offend domestic culture. This collection is an invaluable reference tool which supports the discussion over codification and promotes better understanding across the common law/civil law divide.