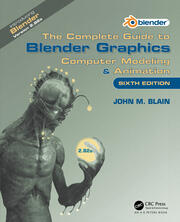 Blender is FREE to download and use by anyone for anything.

The Complete Guide to Blender Graphics: Computer Modeling and Animation, Sixth Edition is a unified manual describing the operation of the program with reference to the Graphical User Interface for Blender Version 2.82a.

A reader of the Sixth Edition should use Blender 2.82a when learning the program and treat it as a training exercise before using any later versions

CH03 Navigate and Save

CH12 The Outliner and Collections

John M. Blain has become a recognised expert in Blender having 5 successful prior editions of this book to date. John became enthused with Blender on retirement from a career in Mechanical Engineering. The Complete Guide to Blender Graphics originated from personal notes compiled in the course of self learning. The notes were recognised as an ideal instruction source by Neal Hirsig, Senior Lecturer (Retired) at Tufts University. Neal encouraged publication of the First Edition and in doing so is deserving of the author's gratitude. Gratitude must also be extended to the author's wife Helen for her continuing encouragement and patience as new editions of the book are compiled.

The 6th Edition continues the philosophy, from earlier versions of the book, introducing the features of the program through the Graphical User Interface (GUI). Knowing where controls and tools are located and what they do is the key to understanding how Blender operates.

The Blender program continues to evolve with new features being added and improvements being made.

Changes are not made on a whim but occure to facilitate additions and improvements.

At the release of The 6th Edition of the Complete Guide to Blender Graphics the latest version of Blender is version 2.82a. This version has made the program completely stable with the inclusion of a reborn Physics System using Mantaflow for liquid/gas simulation and improving cloth physics.

The Mantaflow system allow the creation of fantastic fire and smoke simulations. At the same time a new FLIP solver produces lifelike liquids.

Other improvements, features and additions to the program are;

Cycles itself has been greatly improved with the addition of new nodes.

Rendering times on Windows has been significantly reduced by employing BVH build time with better memory allocators, making it similar to Linux and macOX.

The Grease Pencil 2D Animation Workspace is incorporated in the Blender pipeline with significant development.

In the later versions of Blender the Game Engine for the creation of interactive computer games has been disbanded with a recommendation to use external engines.

Much of the foregoing may be daunting for a new user but The Complete Guide to Blender Graphics 6th Edition starts at the beginning of the learning process catering for the new users and leads them gently into this facinating and rewarding world of creativity using Blender.