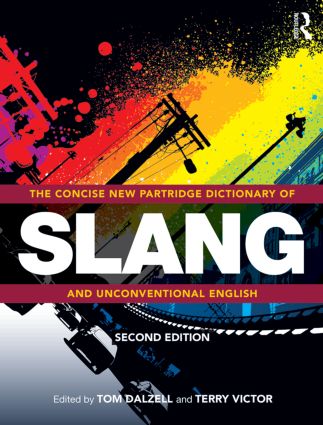 The Concise New Partridge Dictionary of Slang and Unconventional English

Containing over 60,000 entries, this concise new edition of the authoritative work details the slang and unconventional English of from around the English-speaking world since 1945, and through the first decade of the new millennium, with the same thorough, intense, and lively scholarship that characterized Partridge’s own work.

Unique, exciting and, at times, hilariously shocking, key features include:

New to this second edition:

The Concise New Partridge Dictionary of Slang and Unconventional English

is a spectacular resource infused with humour and learning – it’s rude, it’s delightful, and it’s a prize for anyone with a love of language.

Praise for the two-volume New Partridge Dictionary of Slang and Unconventional English:

'The king is dead. Long live the king! … The old Partridge is not really dead; it remains the best record of British slang antedating 1945 … Now, however, the preferred source for information about English slang of the past sixty years is the New Partridge.' – James Rettig, Booklist, American Library Association

'Most slang dictionaries are no better than momgrams or a rub of the brush, put together by shmegegges looking to make some moola. The New Partridge Dictionary of Slang and Unconventional English, on the other hand, is the wee babes.' – Ian Sansom, The Guardian

Recognized as one of the leading expert on American slang,  Tom Dalzell’s most recent publications include Damn the Man: Slang of the Oppressed (2011), Far Out Depends on Where You’re Standing (2012) and Vietnam War Slang: A Dictionary on Historical Principles (also published by Routledge, 2014).

Not only a slang collector but also an actor, broadcaster, writer and director, Terry Victor is currently engaged in the compilation of A Dictionary of Rhyming Slangs and the development of Awkward Turtle Flips the Bird, a performed glossary of gestural slang.