The Contemporary Commonwealth
An Assessment 1965-2009 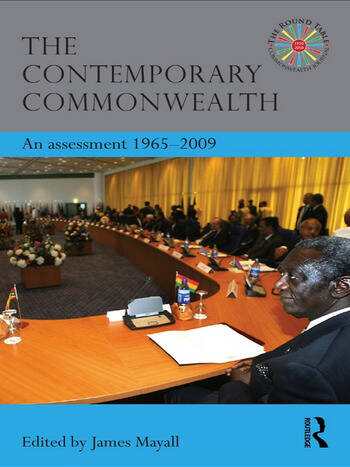 The Contemporary Commonwealth: An Assessment 1965-2009

This collection of essays has been assembled to mark the centenary of The Round Table. It provides an analysis of the modern Commonwealth since the establishment of the Secretariat in 1965.

Providing an overview of the contemporary Commonwealth, this book places the organization in its rich historical context while assessing its achievements, failures and prospects. The volume is divided into two parts:

• Part I concentrates on a series of themes, dealing with the structure and functioning of the Commonwealth and its major activities, including the work of the secretary general and secretariat, its championing of the interests of small states, human rights and the world economy.

This collection of essays is intended as a companion volume to The Commonwealth and International Affairs, edited by Alex May, marking the centenary of The Round Table.

James Mayall is the Sir Patrick Sheehy Professor of International Relations and Director of the Centre of International Studies at the University of Cambridge, UK. He was elected a Fellow of the British Academy in 2001.

'The 60th anniversary celebrations of the modern Commonwealth offer as good an occasion as any for a stock-taking of this unique institution's strengths and weaknesses, achievements and failures. This volume takes a good stab at that task and comes up with some interesting insights [...] Of particular interest to readers of this journal will be an illuminating chapter on the Commonwealth and Law by Peter Slinn.' - The Commonwealth Lawyer: Journal of the Commonwealth Lawyers Association, Vol 19, No 1. April 2010