The Contemporary Crisis of the European Union
Prospects for the future 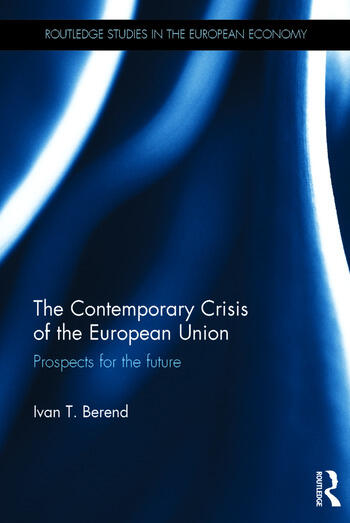 The Contemporary Crisis of the European Union: Prospects for the future

The European Union widened and deepened integration when it introduced the Single Market and the common currency, increasing the number of member countries from 12 to 28. After a quarter of a century, the 2008 financial and economic crisis opened a new chapter in the history of European integration. Prosperity was replaced by economic crisis and then long stagnation, with ramifications far beyond the economic arena.

For the first time, after more than half a century, some countries were almost forced to step out of the Union. History’s most frightening migration crisis shocked Europe and led to the strengthening of several anti-integration parties in various countries. This pioneering book discusses the nine crisis elements that could lead to disintegration of the EU. Beginning with the Greek Debt disaster this book delves into the cause of the recent European crisis and then onto the recent immigration influx and its consequences, as well as Britain’s exit from the Union. A concluding chapter, based on the facts of positive development during the crises years, gives a cautiously optimistic forecast for the future and asks the question: further integration or disintegration?

This volume is of great importance to academics, students and policy makers who have an interest in European politics, political economy and migration.

Inside economic and political factors of the crisis

1 Britain: from outsider to inside-outsider and outsider again. Joining late, stepping out early

2 The crisis of the common currency, the euro

3 The tragicomedy of the Greek debt crisis

5 Suicidal enlargement of the European Union?

6 The state of transforming Eastern Europe

International factors and outside challenges

8 The Russian challenge: the EU’s security and energy independence

9 The immigration crisis and its explosive consequences

Ivan T. Berend is Distinguished Research Professor at the Department of History, University of California, USA. He is a member of the American Academy of Arts and Sciences; the British Academy, the Austrian Academy of Sciences, the Academia Europea, and three other European Academy of Sciences and has published more than 30 books and 200 studies.

'For those interested in the EU’s present and future, this timely book explores the multitude of crises circulating from a variety of economic, political and societal forces from both internal and external directions.' — Dr Mark Baimbridge, University of Bradford