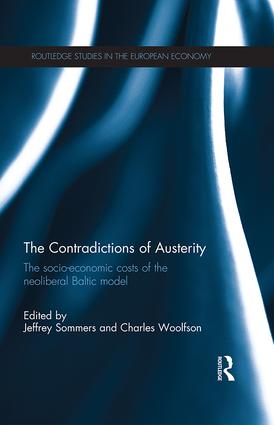 The Contradictions of Austerity

The Socio-Economic Costs of the Neoliberal Baltic Model, 1st Edition

The great financial crisis of 2008 and the ensuing global economic and financial turmoil have launched a search for "models" for recovery. The advocates of austerity present the Baltic States as countries that through discipline and sacrifice showed the way out of crisis. They have proposed the "Baltic model" of radical public sector cuts, wage reductions, labor market reforms and reductions in living standards for other troubled Eurozone countries to emulate. Yet, the reality of the Baltic "austerity fix" has been neither fully accepted by its peoples, nor is it fully a success. This book explains why and what are the real social and economic costs of the Baltic austerity model.

We examine each of the Baltic States by connecting national level studies within a European and global political economy, thereby delivering comparative breadth that supersedes localized understandings of the crisis. Thus for each of the three Baltic states, individual chapters explore the different economic and social dimensions of neo-liberal post-communism and the subsequent wider global economic and financial crisis in which these newly financialized economies have found themselves especially vulnerable. The "austerity model" adopted by Baltic national governments in response to the crisis reveals the profound vulnerabilities created by their unwavering commitment to liberalized economies, not least in terms of the significant "exit" of their labor forces and consequent population loss.

This book looks beyond basic financial metrics claiming a success story for the Baltic austerity model to reveal the damaging economic and social consequences, first of neo-liberal policies adopted during transition, and latterly of austerity measures based on "internal devaluation." Combined these policies undermine the possibility of longer-term recovery and even social and economic sustainability, not to mention prospects for successful integration in the now-faltering European project that has departed from its "Social Model" roots.

'This book promises to become the defining study on the impact of austerity in the Baltics, otherwise known as the ‘Baltic miracle.’ The Baltic miracle has been heralded by partisans of neoliberal austerity as demonstrating the success of their economic therapy, despite the pain for the affected populations. As these carefully argued and well-documented studies reveal, if this ‘miracle’ counts as success, one would hate to imagine what failure might be. As the editors rightly argue, the import of these incisive inquiries is also “a stark warning” to the European Union, and the world, as the neoliberal assault steadily demolishes the social model that was Europe’s great contribution to modern civilization.' - Noam Chomsky

'The crisis of 2008 put Europe’s Periphery in a state of civil war between those who had not caused the crisis, and were asked to pay for it, and the few who had caused it but insisted on remaining in power. The Baltic countries were the first battleground on which the powers-that-be fought for their survival wielding the lethal weapon of austerity. They “made a desert”, “called it peace”, and then exported it to Ireland and Europe’s South hidden behind claims of “success” in the Baltics. Never before has spectacular economic policy failure been so effectively re-packaged as “success” and pressed into service so as to enfeeble, humiliate and usurp a whole Continent. By deconstructing the “official version” of austerity’s effects on the Baltics, this book contributes greatly to those who care for Europe and for the truth.' - Yanis Varoufakis

'This is a book by scholars of great integrity and independence, who have spent years on the ground in the Baltics or close by.' - James Galbraith, Lloyd M. Bentsen Jr. Chair in Government/Business Relations at the Lyndon B. Johnson School of Public Policy at the University of Texas. Author of the forthcoming The End of Normal: The Great Crisis and the Future of Growth.

'This book offers a detailed, knowledgeable, concise and exceptionally clear examination of the impact of the global crisis on the Baltic countries. 'Austerity' has had a severe and wholly regressive impact upon women, the poor, the young and the old, and upon farmers, students, civil servants and anyone unconnected with the top layers of capital, the state and the ruling (financial) elites. The experience of the Baltic countries reveals the social and economic disasters which have befallen Europe in the wake of the global crisis. This book carries a warning and an alternative, and it should be read by everyone with an interest in the future of Europe.' -Alfredo Saad Filho: Professor of Development Studies, SOAS, University of London and co-editor of Economic Transitions to Neoliberalism in Middle-Income Countries

'On the 5th of June 2012 world economic leaders came together in Riga, Latvia, to drink champagne and eat canapes while toasting Latvia's recent economic success. And what had Latvia done to deserve such adoration? It had dealt with the implosion of a patently unsustainable foreign currency debt financed bubble economy by slashing state expenditures faster and further than anyone had thought possible. And the payoff? A quadrupling of debt in four years. As much as a fifth of the labor market living abroad. Persistently high unemployment for those that remained. And a new economic model that relies upon Russian tax evasion and remittances as a major sources of revenue. Somehow the attendees that night, and in the press reports thereafter, forgot that side of the Baltic Miracle. Sommers and Woolfson (and their colleagues) have provided us with the definitive correction of record.' -Mark Blyth: Professor of International Political Economy at Brown University and author of Austerity: The History of a Dangerous Idea

"The Contradictions of Austerity promises to be a hugely important contribution in the current debate over the future of Europe. As the outline correctly points out, while all eyes are focused on the turmoil in Greece and other southern nations in the EU, the truly devastating parable has been unfolding in the Baltic countries. It is imperative that the Aslund apologia be challenged and decisively rebutted, a task for which the contributors to The Contradictions of Austerity are very well qualified. Their work is extremely well researched and compellingly presented." -Alexander Cockburn, the late editor of CounterPunch commenting on the book proposal and authors’ research on austerity in the Baltics

"The Contradictions of Austerity is a timely, incisive, perceptive, provocative, and important collection of essays which addresses all these matters." - Leonidas Donskis for Transitions Online

Introduction 1. Austerity, Internal Devaluation and Social (In)Security in Latvia 2. Stockholm Syndrome in the Baltics 3. Failed and Asymmetrical Integration 4. The Lithuanian Labor Market under the Impact of Crisis5. Balancing between Exit, Voice and Loyalty: Labor Market Policy Choices in Estonia Conclusion

Charles Woolfson is a labour sociologist at the Institute for Research on Migration, Ethnicity, and Society (REMESO), Linköping University, Sweden.

Routledge Studies in the European Economy

Routledge Studies in the European Economy is our home for cutting-edge, upper-level scholarly studies and edited collections. Featuring compact and well researched volumes of 150 to 300 pages, the series provides a range of content considering the European economy alongside history, politics, cultural studies, agriculture, education, globalisation, and other subjects, titles are characterized by dynamic interventions into established subjects and innovative studies on emerging topics.