The Correspondence (c. 1626–1659) of Dorothy Percy Sidney, Countess of Leicester 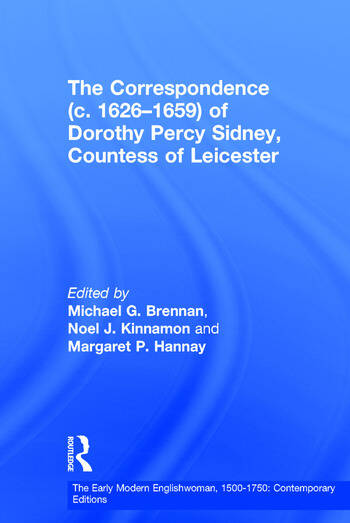 The Correspondence (c. 1626–1659) of Dorothy Percy Sidney, Countess of Leicester

The letters of Dorothy Percy Sidney, Countess of Leicester, dating predominantly from about 1636 until 1643, cover a wide range of issues and vividly illustrate her centrality to her illustrious family's personal and public affairs. These c.100 letters are here for the first time fully transcribed and edited. The edition includes a biographical and historical introduction, setting the context of the Sidneys' family and political activities at the time of Dorothy's marriage to Robert in 1615 and then tracing the major events and involvements of her life until her death in 1659. A key to the cipher used in the letters to disguise identities of individuals is also supplied. Following the introduction is the complete text of each of Dorothy Percy Sidney's letters to her husband, Robert, second Earl of Leicester, and to and from William Hawkins, the Sidney family solicitor, along with several others, including letters from Dorothy to Archbishop Laud and the Earl of Holland. Her husband's account of her last moments in 1659, and testamentary directions relating to her will, are also included. The letters are arranged in chronological order and supported by a series of footnotes that elucidate their historical context and briefly to identify key individuals, places, political issues and personal concerns. These notes are further supported by selective quotations from Dorothy's incoming correspondence and other related letters and documents. A glossary supplies more detailed information on 'Persons and Places.' Dorothy Percy Sidney's letters eloquently convey how, even with her undoubted personal potency and shrewd intelligence, the multifaceted roles expected of an able and determined aristocratic early modern Englishwoman-especially when her husband was occupied abroad on official business-were intensely demanding and testing.

Michael G. Brennan, Margaret P. Hannay and Noel J. Kinnamon have together edited Domestic Politics and Family Absence (Ashgate, 2005); and The Collected Works of Mary Sidney Herbert, Countess of Pembroke for the Oxford English Texts Series (Oxford UP, 1998) ;and a modern-spelling edition for students and general readers, Selected Works of Mary Sidney Herbert, Countess of Pembroke (MRTS, 2005). They are currently editing The Correspondence of Rowland Whyte and Robert Sidney, first Earl of Leicester. Margaret Hannay, Professor of English at Siena College, is the author of Philip's Phoenix: Mary Sidney, Countess of Pembroke (Oxford UP, 1990), editor of Silent but for the Word: Tudor Women as Patrons, Translators, and Writers of Religious Works (Kent State UP, 1985), and editor, with Susanne Woods, of Teaching Tudor and Stuart Women Writers (MLA, 2000). Michael G. Brennan, Professor of Renaissance Studies at the University of Leeds, is the author of The Origins of the Grand Tour (Ashgate, 2005) and The Sidneys of Penshurst and the Monarchy, 1500-1700 (Ashgate, forthcoming. He is also author of Literary Patronage in the English Renaissance: The Pembroke Family (Routledge, 1988); and has edited Lady Mary Wroth's Love's Victor: The Penshurst Manuscript (Roxburghe Club, 1988). With Noel Kinnamon he has published A Sidney Chronology: 1554-1654 (Palgrave Macmillan, 2003) and has published extensively on Renaissance travel writings.

Prize: Winner of the Josephine Roberts Edition Prize, awarded by the Society for the Study of Early Modern Women in 2011 'Filling in the gaps between the 140 items is a forty-eight page Introduction that focuses on the domestic relationships of this large, well-connected family, a table and family tree indicating all the family members of importance, an eleven-page chronology, and an Appendix listing the eighty books the Countess possessed at her death ... this welcome edition shows how much can be learned from the daily letters of one not very famous woman, married into a distinguished lineage, about court entanglements, marriage negotiations, backstage influences on the public life of aristocrats dedicated (until their disillusionment) to the king’s service, and the domestic and financial affairs of a magnate family whose documentary record will doubtless yield further riches, if it continues to be imaginatively interrogated.' The Library 'Both its exacting introduction and its thorough collection and consideration of the letters of Dorothy Percy Sidney make Brennan, Kinnamon, and Hannay’s edition an asset to Sidney scholars around the world. Its modernized spellings promise to reveal the importance of Dorothy’s writing to all levels of researchers.' Notes and Queries