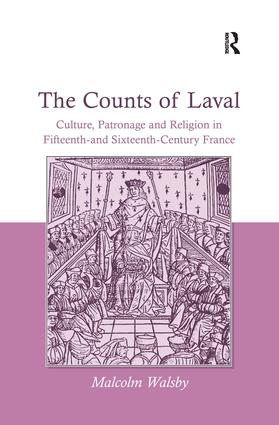 The Counts of Laval

The Lavals were one of the most important families in late medieval France, rising to a position of unsurpassed eminence by the mid sixteenth century. Yet, at the very point where they reached this position of unrivalled importance, all was put at risk by the dual challenges of dynastic failure and the Reformation. The vagaries of dynastic failure threatened their hard won success and these problems were compounded by the decision of crucial members of the family to support Protestantism in the middle of the century. By the end of the sixteenth century the fortunes of the family were in ruins and the brief eminence of Lavals in western France was over. This monograph offers a fresh look at several of the critical questions facing historians of late medieval and early modern France. It re-examines the clientage of a rising and enterprising family and explores the cultural patronage of a noble court. The book also provides a new insight into the nature of noble Protestantism, notably analysing the connections between nobles, patterns of family loyalty and religious conviction. Finally, it considers the events of wars of religion in western France from the perspective of a noble leadership that simultaneously played a vital role in sustaining the cause and did much to undermine it. This latter issue is examined in particular through the analysis of the relationship between the houses of Laval and Rohan, two Protestant families with shared loyalties but with rival dynastic ambitions. This study is based on a complete re-examination of the archive base in both Paris and the west of France and in English archives. For many centuries the destruction of the archives of the family of Laval during the French Revolution has prevented historians from undertaking a serious study of the family. Indeed, this book is the first monograph to be published on the Comtes de Laval since the manuscript volume written by Le Blanc de La Vignole in the seventeenth century. At the same time it engages with the historiography of both French and Anglo-Saxon historiographical traditions.

’Malcolm Walsby provides a great deal of precise information on clientage that will deepen any general study of the subject.’ Renaissance Quarterly ’In sum, The Counts of Laval offers much of interest to historians of the nobility and their power bases in the fifteenth and sixteenth century. Walsby provides a valuable case-study to accompany the extensive theoretical literature on patronage in this period.’ Parergon ’This book is worthy of the attention of anyone interested in the history of the late medieval and early modern French nobility.’ Sixteenth Century Journal ’Solidement documenté et appuyé sur une bibliographie très Ã  jour, le livre de M. Walsby est une contribution précieuse Ã  l'histoire de la société politique des XVe et XVIe siècles.’ Revue d'Histoire Moderne et Contemporaine ’Historians of the Reformation often discuss questions of loyalty in somewhat abstract terms, whereas in this well-researched study such questions are placed in the long-term context of the family and its regional significance.’ French Studies

Contents: Introduction; Mediaeval Lords: the rise of the House of Laval; The network of affinity; The Golden Age; New challenges: the Wars of Religion; Laval versus Rohan; Conclusions Appendix: genealogy tables; Bibliography; Index.

Malcolm Walsby is a Postdoctoral Research Fellow at the University of St Andrews, UK.