The Craft of Political Research 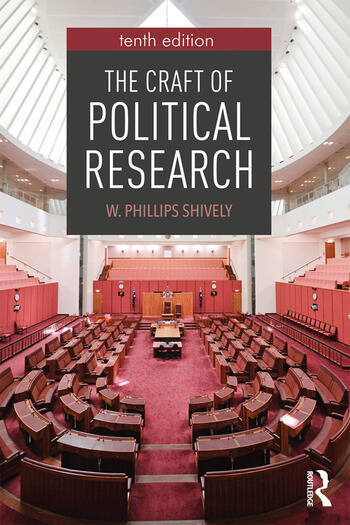 The Craft of Political Research

The Craft of Political Research is a non-technical introduction to research design and analysis in political science, emphasizing the choices we make when we design a research project and analyze its results. The book’s approach centers on asking an interesting research question, and then designing inquiry into the question so as to eliminate as many alternative explanations as possible.

How do we develop theory, and what constitutes a good research question? How do we develop measures and gather evidence to answer a question? How do we analyze our findings? Students will be introduced to such topics as multidimensional concepts, levels of measurement, validity, reliability, random and non-random measurement error, sampling, case selection, causality, experimental and quasi-experimental design, statistical inference, and regression and correlation analysis. Throughout, the emphasis is on understanding the "back story" of analysis — why do we measure in a particular way, why do we choose one design as against another, why do we conduct our analysis as we do.

Emphasizing the internal logic of research methods and the collaborative nature of the research process, the greatest strength of the book is its clarity and the large range of political science examples it provides. It works at a conceptual level, seeking an understanding of the principles that underlie techniques and the reasons that we choose them.

Chapter 7. Selection of Observations for Study

Chapter 9. Introduction to Statistics: Further Topics on Measurement of Relationships

Chapter 10. Introduction to Statistics: Inference, or How to Gamble on Your Research

This book distills the practical wisdom of decades of top-quality research and teaching by Phil Shively. The prose and logic are so crystalline that even a rookie can follow every argument, and the advice is so subtle and sophisticated that even the most grizzled veteran can learn from it. Nothing rivals this book as an introduction to political research.

Shively’s The Craft of Political Research has stood the test of time and launched innumerable research careers inside and outside of academia. The 10th edition continues to innovate with critical topics of evaluating accurate information and sources.

Most social and behavioral scientists, and perhaps especially political scientists, encounter undergraduates eager to change the world who then face the stark reality that doing the research to know what and how to do so is hard intellectual work. The Craft of Political Research not only provides the tools and understandings to make that transition, but it also does is in such an enjoyable (but technically sound) way that students keep their enthusiasm, tempered with sound judgements about how to make the transition for idealist to sound researcher. Even more, while originally written nearly a half century ago, Shively’s commitment to updating keeps this tenth addition fresh, alive, and current.

I was very fortunate to be introduced to The Craft of Political Research in my first semester in college. It has helped to shape the way I think about my own work and others’ for more than 40 years now. With this judiciously updated tenth edition, Shively continues to offer the wisest and most authoritative introduction I know to the logic and practice of political science.

The Craft of Political Research remains the go-to introductory text on methods in political science. Jargon-free and accessible it teaches students how to design research and use statistics to answer theoretically important questions. The potential of experiments is highlighted, but the book also shows how to make effective use of observational data. With examples from across the discipline, Shively turns a dry topic into an exciting quest to unlock the mysteries of our political world.