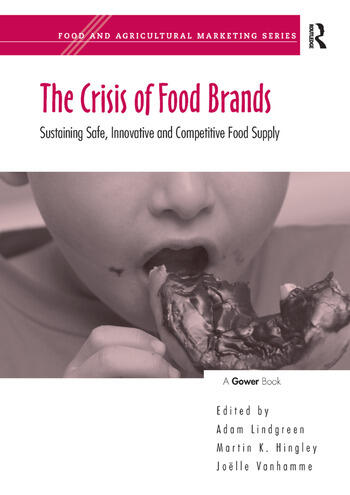 Food and agribusiness is one of the fastest changing global markets; change that is driven by technology, developments in manufacturing and supply, and a growing consumer engagement. The success of the agri-food industry and many of our household brand names will depend on how much you understand about these changes and the extent to which you can deliver secure and competitive products in the face of growing expectations about food safety and quality, as well as changing attitudes about the environment, human diet and nutrition, and animal welfare. The Crisis of Food Brands offers perspectives on many key aspects of these changes including the role of business, policy-makers, and the media in communicating with and engaging stakeholders about: o relevant and dynamic models of risk and crisis management; o the value of innovative and, sometimes controversial, food systems; o their buying behaviour and attitudes to movements such as organic and fair trade; o how and where we source and buy our food now (and in the future). The quality of the original research that underpins this book and the imagination and practicality with which the authors address its applications for the industry is first rate. Anyone with responsibility for marketing food, communicating about the food industry, or engaging with consumers will find this an important source of ideas and inspiration.

Dr Adam Lindgreen is professor of marketing at Cardiff University. Previously he was professor of strategic marketing at Hull University Business School, U.K. After graduating in engineering, chemistry, and physics, Dr. Lindgreen first finished an MSc in food science and technology at the Technical University of Denmark and is now a European Engineer (EurIng); he then finished an MBA at Leicester University. In 2000, he received his Ph.D. at Cranfield University. He has published widely, and his awards include Industrial Marketing Management's Outstanding Article 2005. His research interests include business and industrial marketing management, consumer behaviour, experiential marketing, and corporate social responsibility. Dr Martin K. Hingley is professor of strategic marketing at Lincoln University. Previously he was a Reader in marketing and supply chain management at Harper Adams University College, the leading UK university specializing in agri-food business. He is a visiting fellow to the University of Hull Business School and held a fellowship endowed by Tesco Plc. He graduated in agricultural and food marketing from the University of Newcastle upon Tyne; has an MPhil in marketing from Cranfield University; and a PhD in marketing from the Open University. Dr Hingley also has wide business experience in the international food industry and has spent time in provision of market and business analysis with the Institute of Grocery Distribution. He has presented and published widely in applied food industry marketing and supply chain relationship management. He serves on the board of several scientific journals. Dr JoÃ«lle Vanhamme is associate professor at the IESEG School of Management, Catholic University of Lille. She has a degree in business administration and two master degrees from the Catholic University of Louvain. She has been awarded the CEMS master degree from the Community of European Management Schools. Dr. Vanhamme received her Ph.D. from the Catholic University of Louvain and is currently visiting professor with Hull University Business School. Her research has appeared in several journals.

’...highly readable and based on sound research...a thoughtful and timely industry-based analysis...Recommended.’ - Choice