The Crisis of Poverty and Debt in the Third World 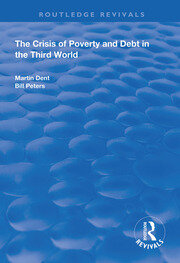 The Crisis of Poverty and Debt in the Third World

First published in 1999, this volume, the first to be published in on Jubilee 2000, describes the plight of 52 of the poorest nations in the world and puts in detail the case for radical cancellation of past inert debt. The cost and benefit of this remission and the groundbreaking concordat of peoples and governments that could accompany it are examined in detail.

It contains critiques of the economic bases of the World Bank and IMF approaches to debt management in developing economies, as manifested in structural adjustment programmes and their maintenance, misuse of excess reserves and the methods used to carry out restructuring and development projects.

The British anti-slavery campaign saw a mobilisation of public opinion for a great cause. Using this as a source of inspiration, public opinion must again be mobilised for what amounts to the greatest opportunity for justice, compassion and forgiveness facing us all at the beginning of a new millennium.

1. The Problem of Debt and Poverty and a Practical Answer. 2. Genesis of Jubilee 2000 – the Beginning of a Debt Campaign under the Name and Pattern of Jubilee. 3. The History of the Growth of the Jubilee 2000 Campaign. 4. The Debt Situation of the 51 Low-Income Countries Whom it is our Task to Liberate from the Chains of Debt. 5. Efforts Made So Far by the World Bank and the Paris Club to Deal with the Problem of Debt. 6. The Boundaries and Criteria of Jubilee Remission. 7. Conditionalities for Remission. 8. Benefits and Costs of the Remission. 9. Some Individual Case Studies. 10. Non-economic Benefits from Cancellation, for Creditor as well as for Debtor Countries (Bill Peters). 11. Parallel of the Anti-Slavery Movement in the 19th Century. 12. Tactical Considerations and Means of Implementing the Jubilee. 13. Beyond the Year 2000. 14. The Origin and Development of the Campaign for Debt Relief / Cancellation and the Critique of the IFIs, 1983-93. 15. The Approach to Debt in Other Faiths. 16. The International Spread of the Jubilee 2000 Campaign. 17. WB Philosophies and Policies: the Unsoundness of the Theoretical Economic Base. 18. Other Areas of Activity and Management Where the IFIs Fall Short. 19. Conditions for Remission: Is a Grand Concordat Possible? 20. Reform of UN, Including Bretton Woods, Structures.