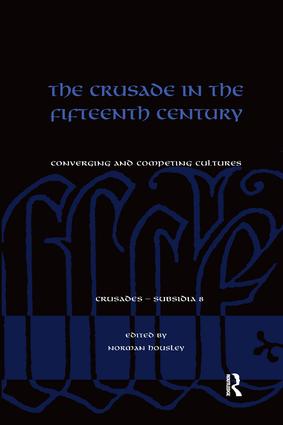 The Crusade in the Fifteenth Century

Increasingly, historians acknowledge the significance of crusading activity in the fifteenth century, and they have started to explore the different ways in which it shaped contemporary European society. Just as important, however, was the range of interactions which took place between the three faith communities which were most affected by crusade, namely the Catholic and Orthodox worlds, and the adherents of Islam. Discussion of these interactions forms the theme of this book. Two essays consider the impact of the fall of Constantinople in 1453 on the conquering Ottomans and the conquered Byzantines. The next group of essays reviews different aspects of the crusading response to the Turks, ranging from Emperor Sigismund to Papal legates. The third set of contributions considers diplomatic and cultural interactions between Islam and Christianity, including attempts made to forge alliances of Christian and Muslim powers against the Ottomans. Last, a set of essays looks at what was arguably the most complex region of all for inter-faith relations, the Balkans, exploring the influence of crusading ideas in the eastern Adriatic, Bosnia and Romania. Viewed overall, this collection of essays makes a powerful contribution to breaking down the old and discredited view of monolithic and mutually exclusive "fortresses of faith". Nobody would question the extent and intensity of religious violence in fifteenth-century Europe, but this volume demonstrates that it was played out within a setting of turbulent diversity. Religious and ethnic identities were volatile, allegiances negotiable, and diplomacy, ideological exchange and human contact were constantly in operation between the period's major religious groupings.

2 Crusading in the fifteenth century and its relation to the development of Ottoman dynastic legitimacy, self-image, and the Ottoman consolidation of authority

3 Byzantine refugees as crusade propagandists: the travels of Nicholas Agallon

4 Dances, dragons and a pagan queen: Sigismund of Luxemburg and the publicizing of the Ottoman Turkish threat

5 Alfonso V and the anti-Turkish crusade

6 Papal legates and crusading activity in central Europe: the Hussites and the Ottoman Turks

7 Switching the tracks: Baltic crusades against Russia in the fifteenth century

8 Tīmūr and the ‘Frankish’ powers

10 Quattrocento Genoa and the legacies of crusading

Frontier zones: the Balkans and the Adriatic

11 The key to the gate of Christendom? The strategic importance of Bosnia in the struggle against the Ottomans

12 Between two worlds or a world of its own? The eastern Adriatic in the fifteenth century

13 The Romanian concept of crusade in the fifteenth century

14 Conclusion: transformations of crusading in the long fifteenth century

Norman Housley is Professor of History at the University of Leicester, UK.

The series of Subsidia to the journal Crusades is designed to include publications deriving from the conferences held by the Society for the Study of the Crusades and the Latin East along with other volumes associated with the society.

The scope of the series parallels that of the journal itself: Crusades covers seven hundred years from the First Crusade (1095-1102) to the fall of Malta (1798) and draws together scholars working on theaters of war, their home fronts and settlements from the Baltic to Africa and from Spain to the Near East and on theology, law, literature, art numismatics and economic, social, political and military history.