The Cult of St Anna in Byzantium 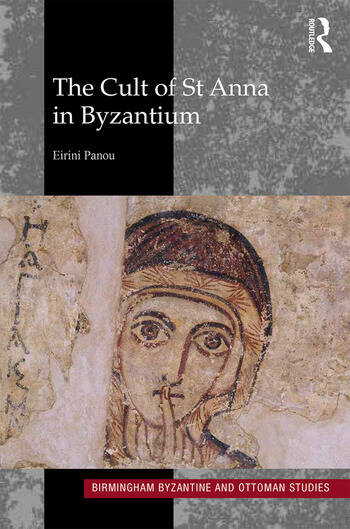 The Cult of St Anna in Byzantium

The Cult of St Anna in Byzantium is the first undertaking in Byzantine research to study the phenomenon of St Anna’s cult from the sixth to the fifteenth centuries. It was prompted by the need to enrich our knowledge of a female saint who had already been studied in the West but remained virtually unknown in Eastern Christendom. It focuses on a figure little-studied in scholarship and examines the formation, establishment and promotion of an apocryphal saint who made her way to the pantheon of Orthodox saints. Visual and material culture, relics and texts track the gradual social and ideological transformation of Byzantium from early Christianity until the fifteenth century. This book not only examines various aspects of early Christian and Byzantine civilisation, but also investigates how the cult of saints greatly influenced cultural changes in order to suit theological, social and political demands.

The cult of St Anna influenced many diverse elements of Christian life in Constantinople, including the creation of sacred spaces and the location of haghiasmata (fountains of holy water) in the city; imperial patronage; the social reception of St Anna’s story; and relic narratives. This monograph breaks new ground in explaining how and why Byzantium and the Orthodox Church attributed scriptural authority to a minor figure known only from a non-canonical work.

Contents: List of illustrations; List of abbreviations; Introduction; Chapter 1: The emergence of St Annaʼs cult in Jerusalem and Constantinople, The Probatike and fifth-century ecclesiastical politics in Jerusalem, The church of Mary at the Probatike as Maryʼs birthplaceThe emerging cult of St Anna in Constantinople, The Justinianic model of the Probatike in the Post Sixth century topography of Constantinople: The Pege, the Chalkoprateia and the Hodegetria,Imperial patronage after Justinian I in Constantinople and beyond: Basil I- Leo VI, The text of Theophanes Continuator revisited, Justinian I, the Macedonian dynasty and St Anna, Conclusions; Chapter 2: Relics- Feasts- Social approaches, Part I. Relics, First group: Palestine-St Anna’s relics in the Probatike, Second group: From Palestine to France, Third group: The relics in Constantinople and Rome: The Patria and scholarly views, The translation according to the Patria, The translation from Constantinople to Rome: scholarly views and evidence, The relics in Constantinople in the sixteenth century, The Pammakaristos church,  Fourth group: From Trebzond to Athos, Conclusions. Part II. Feasts, Introduction,  The Conception of St Anna/ Kissing of Joachim and Anna, Significance of the feast, Scholarly views on the development of the feast Celebration in Constantinople, The Nativity of Mary, Significance of the feast, Origins in Palestine, Scholarly views on its development in Constantinople, Spread in Constantinople, The Entry of Mary, Development of the feast , The Dormition of St Anna and the feast of Sts Anna and Joachim, Conclusions. Part III. Social approaches, Hagiography: St Anna and iconophilia, Hagiography :St Anna and childbirth, Histories: St Anna and iconophilia in Theophanes’s Chronographia and the Patria of Constantinople, Church calendars, hagiography and histories: Women at the church of Blachernai, Demonstration of Orthodoxy: Annas in monasteries- the Synodikon of Orthodoxy Nomenclaturem, Martyria of various Annas in Constantinople: The Russian travellers, St Anna the Virgin, Martyrs and Mothers named Anna, St Anna of Leukate, Conclusions to chapters 1 and 2; Chapter 3: The visual evidence, Egypt - Cathedral of Faras (eighth and tenth centuries), Constantinople and Rome in the fifth and sixth centuries, Santa Maria Antiqua: The Three Mothers, Chapel of St Nicholas, Paros (Greece, eighth century), Southern Italy- Crypt of St Christine (tenth century), Cappadocia (ninth to thirteenth centuries), The earliest extensive Mariological cycle. The Marian cycle in the chapel of Joachim and Anna at Kizil Tchoukour, Anna’s and Joachim’s iconic portraits, Anna as a mother, Glorification of Christ –Incarnational role, Healing qualities, Intercession-Deesis, Constantinople (tenth to fourteenth centuries), Ethiopia (thirteenth century), Greece (tenth to fifteenth centuries) , Central Greece Peloponnese, Greek islands (excluding Crete), Crete : Anna as a mother, Anna suckling the Virgin, Anna holding the Virgin, Christological associations: Anna and Joachim and the Mandylion, Christological associations: Anna and Joachim, the Mandylion and Mary’s Annunciation, Icons-Book covers, Fulfilment of prophecies, Military saints, Donors, Icons from Crete, Conclusions; Chapter 4: An overview; Bibliography; Index.

Dr. Eirini Panou studied Art and Archaeology at the National Kapodistrian University of Athens and earned her Ph.D. in Byzantine Studies from the University of Birmingham (2012). After the completion of her post-doctoral research at the Hebrew University of Jerusalem (Israel) in 2015, she became adjunct faculty at the Open University of Patras and Cyprus teaching Byzantine art and Byzantine Public and Private Life. She is also research associate of the National Research Centre in Athens. She has produced articles on the cult of saints in Byzantium, on art, on female patronage, on magic, on theology, on the Protevagelion of James, and on Byzantine history.