The Cut and the Building of Psychoanalysis: Volume II
Sigmund Freud and Sándor Ferenczi 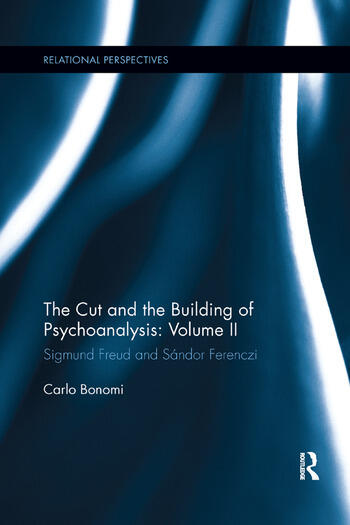 The Cut and the Building of Psychoanalysis: Volume II: Sigmund Freud and Sándor Ferenczi

The Cut and the Building of Psychoanalysis Volume II explores how the unformulated trauma associated with surgery performed on Emma Eckstein’s genitalia, and the hallucinations that Eckstein experienced, influenced Freud’s self-analysis, oriented his biological speculations, and significantly influenced one of his closest followers, Sándor Ferenczi. This thought-provoking and incisive work shows how Ferenczi filled the gaps left open in Freud’s system and proved to be a useful example for examining how such gaps are transmitted from one mind to another.

The first of three parts explores how the mind of the child was viewed prior to Freud, what events led Freud to formulate and later abandon his theory of actual trauma, and why Freud turned to the phylogenetic past. Bonomi delves deeper into Freud’s self-analysis in part two and reexamines the possible reasons that led Freud to discard the impact and effects of trauma. The final part explores the interpersonal effects of Freud’s self-dissection dream, arguing that Ferenczi managed to dream aspects of Freud’s self-dissection dream on various occasions, which helped him to incorporate a part of Freud’s psyche that Freud had himself failed to integrate.

This book questions the subject of a woman’s body, using discourse between Freud and Ferenczi to build a more integrated and accurate narrative of the origins and theories of psychoanalysis. It will therefore be of interest to psychoanalysts, psychotherapists, psychologists and social scientists, as well as historians of medicine, science and human rights. Bonomi’s work introduces new arguments to the contemporary debate surrounding Female Genital Mutilation.

‘Carlo Bonomi is a master detective. In the two volumes of The Cut he attempts to decipher Freud's emotional world and its impact on his theories. Uncovering many new facts, and boldly connecting and re-interpreting known facts, he outlines the place of male and female circumcision, seen at that time as a measure preventing dangerous masturbation, in Freud's life and work. In the second volume he suggests that Freud's close disciple and friend Ferenczi absorbed Freud's preoccupation with symbolic castration, but transformed it into his innovative theory of trauma, which aroused Freud's ambivalence.’ – Emanuel Berman, Ph.D., Training and Supervising Analyst, Israel Psychoanalytic Society, Tel Aviv, Israel

‘With a deep knowledge of Freud’s life and work, particularly as it is revealed through autobiographical notes and correspondences, Bonomi attempts to formulate a new narrative of Master Sigmund’s evolution. The proposed hypothesis is fascinating, well documented and very innovative and enlightening. This second volume completes the oeuvre convincingly. A pleasure to read.’ – André E. Haynal M.D., Psychoanalyst (IPA) and Professor, University of Geneva, Geneva, Switzerland

‘By shedding a new light into the traumatic origins of psychoanalysis, Carlo Bonomi provides a meaningful and extremely rich context for the Freud-Ferenczi conflict.  In his articulated narrative the author leans on the most founding dreams of the two men, their personal story, their deafnesses (in particular on Freud’s neglect of the feminine), their most impressing cases as well as on mythologies and religions. Using all these elements, he shows how the theories of Freud and Ferenczi took their origin in all these sources, developed, intertwining, confronting or completing each other and finally resulting in a cut between their two conceptions of psychoanalysis which had lasting consequences on the evolution of the psychoanalytic community, its ways of thinking and practising.’ – Dr Judith Dupont, Psychoanalyst, Member of Association Psychanalytique de France, Paris, France

‘Carlo Bonomi is indeed an original interpreter of the complex and complicated various steps of Freud in founding psychoanalysis. In the pages of the second volume of The Cut and the Building of Psychoanalysis he continues his journey into the origins of psychoanalysis, extending his exploration from Freud’s mind to the minds of other classic authors, principally Sándor Ferenczi, who, though not in open opposition with the Master, created a new language for trauma, offering many elements of a metapsychology much more respectful of patients and closer to their suffering. I can only recommend this alternative narrative of the building of psychoanalysis to all the people interested and curious in the still partially secret history of psychoanalysis, because I am sure that any reader will gain a lot independently from agreeing or not with its principal theses.’ – Franco Borgogno. Training and Supervising Psychoanalyst of the Italian Psychoanalytical Society (IPA), Professor of Clinical Psychology at Turin University, Turin, Italy