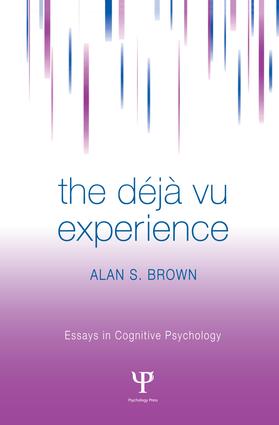 Most of us have been perplexed by a strange sense of familiarity when doing something for the first time. We feel that we have been here before, or done this before, but know for sure that this is impossible. In fact, according to numerous surveys, about two-thirds of us have experienced déjà vu at least once, and most of us have had multiple experiences.

There are a number of credible scientific interpretations of déjà vu, and this book summarizes the broad range of published work from philosophy, religion, neurology, sociology, memory, perception, psychopathology, and psychopharmacology. This book also includes discussion of cognitive functioning in retrieval and familiarity, neuronal transmission, and double perception during the déjà vu experience.

"During the past two decades, however, a few hardy souls have reopened the scientific study of déjà vu. They hope to nail down a persuasive explanation of the phenomenon, as well as shed light on some fundamental elements of memory and cognition. In the new book The Déjà Vu Experience: Essays in Cognitive Psychology (Psychology Press), Alan S. Brown, a professor of psychology at Southern Methodist University, surveys the fledgling subfield. "What we can try to do is zero in on it from a variety of different angles," he says. "It won't be something like, 'Boom! The explanation is there.' But we can get gradual clarity through some hard work." -- The Chronicle of Higher Education

"Overall this book is an interesting and enjoyable read. The author has done a fine job of assembling and summarizing such a large and diverse body of work covering a long period of time. He demonstrates that the phenomenon is by no means beyond the reach of mainstream cognitive psychology and this book will be an invaluable source for those interested in researching this intriguing phenomenon. -- Kevin Crowley, University of Glamorgan, UK."

"the first book-length scientific study of the phenomenon since the 1980s." -- The Dallas Morning News

Appendix B: Summary of scientific explanations of déjà vu

Essays in Cognitive Psychology is designed to meet the need for rapid publication of brief volumes in cognitive psychology.

Furthermore, the series seeks to define cognitive psychology in its broadest sense, encompassing all topics either informed by, or informing, the study of mental processes. As such, it covers a wide range of subjects including computational approaches to cognition, cognitive neuroscience, social cognition, and cognitive development, as well as areas more traditionally defined as cognitive psychology.

Each volume in the series makes a conceptual contribution to the topic by reviewing and synthesizing the existing research literature, by advancing theory in the area, or by some combination of these missions.

The principal aim is that authors provide an overview of their own highly successful research program in an area.

Volumes also include an assessment of current knowledge and identification of possible future trends in research.

Each book is a self-contained unit supplying the advanced reader with a well-structured review of the work described and evaluated.