The Design of the University
German, American, and “World Class” 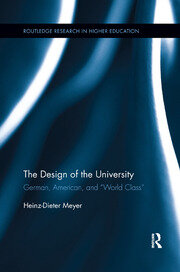 The Design of the University: German, American, and “World Class”

Built on a searching analysis of the design thinking of Wilhelm von Humboldt and Adam Smith and closely tracing the learning process by which Americans adapted the German model, The Design of the University dismisses efforts to copy superficial features of the American university in order to achieve world-class rank. Calling attention to the design details of the university and the particulars of its institutional environment, this volume identifies the practices and choices that produced the gold standard for today’s world class higher education.

Part 1: Glimpses of a New Design 1. Introduction: The "World Class" Discourse and the Perspective of Institutional Design 2. Ticknor in Göttingen: The Discovery of a New Institution 3. Adam Smith and "The Very Absurd Constitution of the English Universitys" 4. Humboldt’s Design Revolution: Two Steps Forward, One Step Back Part 2: Institutional Learning: Events, Actors, and Beliefs 5. The Migration of an Institution: From Boston to Berlin and Back 6. Contested Designs: Scholars and Patricians 7. Protestants and Philanthropists 8. Centralizers and Localizers 9. Purity or Utility? The Business School in the Academy 10. Fortuitous Idiosyncrasies: How Humboldt Flourished in America Part 3: Achieving Self-Government: Six American Design Shifts 11. Collegial Self-Government 12. Executive Presidents 13. Infrastructure of Independence 14. Hierarchies and Heterarchies 15. From State to Civil Society 16. Shared Governance17. Systemic Design Properties: Autonomy as Complex Self-Organization Part 4: Conclusion 18. Self-Government as Fragile Equilibrium Afterword: Towards "World Class" Managerialism?

Heinz-Dieter Meyer is Associate Professor of Organization and Education at the State University of New York – Albany, USA.

"Thanks to an in-depth historical-comparative analysis of the German and American systems, Meyer succeeds in showing that the design features that account for the strengths of the American university are far more complex than is assumed in these efforts. A must-read for everyone interested to understand the past and possible perils of the globalization of the university."


"This is a great book that makes a significant contribution to comparative studies in higher education, in particular to the growing literature on institutional and policy transfer, in which it will find a secure place as a result of its sophisticated analysis of complex cross-national influence involving the American and German concepts of a university."


"This book provides a fascinating account of how the American university both surpasses and perfects Humboldt’s model as the basis for the modern research university. This highly readable investigation offers an important counter-narrative to the model of the ‘national’ university (constructed around state control and funding) and the recent ‘world-class’ discourse emphasizing de-contextualized ‘one best way’ models of global excellence. True excellence, Meyer argues, is based on incremental institutional learning through a sustainable conversation in which scholars, not managers are in the drivers’ seat."

"Meyer demonstrates how the American university both extends and overcomes some of the key deficits of Smith’s and Humboldt’s models. The book instructively combines organizational sociology with an historical and comparative approach. A fine book!"

This stimulating historical and comparative study exemplifies the importance of in-depth experience and engagement with the cultural and structural environments in which some of the world’s greatest universities have over centuries incrementally developed and been embedded. Heinz-Dieter Meyer is uniquely placed to grapple with the complex processes of institutional learning and design that have made the German and American universities among the globally most productive.

[A] theoretically very well founded and empirically excellent informed analysis of the American university in its historical development and in a highly original comparison to the German model of higher education, as well as by its profound criticism of the current managerialism of the ‘world class university’-ideology. A book that offers such an outstanding analysis and criticism is a must-read for everyone who is concerned with the state and the future of the modern university in a world, in which civil society and civil culture are increasingly exposed to various threats by both state authoritarianism and market fundamentalism.

[T]he book manages – almost en passant – a severe critique of the intellectual banalities, offered in the name of the World Bank, that are in the concept and in the dangers of the pursuit of ‘world-class universities. … It is outstanding in the contemporary literature on comparative higher education. I believe that it will, in the longer term, become recognised as a contemporary classic in that literature. Meyer’s invocation of Tocqueville and Weber and Mary Douglas is not ritualistic. He too has aimed high. His work is serious.

The worldwide debate about the university is conducted with great engagement and stark front lines ... [This book offers] a challenging … even provocative thesis that merits reading.