The Development of Jury Service in Japan
A square block in a round hole? 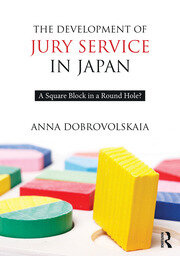 The Development of Jury Service in Japan: A square block in a round hole?

This book presents a comprehensive account of past and present efforts to introduce the jury system in Japan. Four legal reforms are documented and assessed: the implementation of the bureaucratic and all-judge special jury systems in the 1870s, the introduction of the all-layperson jury in the late 1920s, the transplantation of the Anglo-American-style jury system to Okinawa under the U.S. Occupation, and the implementation of the mixed-court lay judge (saiban’in) system in 2009. While being primarily interested in the related case studies, the book also discusses the instances when the idea of introducing trial by jury was rejected at different times in Japan’s history. Why does legal reform happen? What are the determinants of success and failure of a reform effort? What are the prospects of the saiban’in system to function effectively in Japan? This book offers important insights on the questions that lie at the core of the law and society debate and are highly relevant for understanding contemporary Japan and its recent and distant past.

Plan of the Book

Chapter 2: The Pre-war History of the Concept of Trial by Jury in Japan

Historial Background: The Developments in the Japanese Legal System in the Meiji Period

The Introduction of the Concept of Jury Service to Japan

The Meiji Constitution: The Public Debate

Boissonade’s Proposal: Provisions Concerning the Jury in the Draft of the Code of Criminal Instruction

Historical Background: The Developments in the Legal System in the Late Meiji, Taishō, and Early Shōwa Periods

The Jury Act: A Summary

The Japanese Jury in Action

Historical Background: Japan and Its Colonies

Taiwan: Attempts to Introduce the Jury System in the Japanese Colonial Period

Karafuto: The Jury System on the Island during the Japanese Colonial Period

The Jury System in Colonial Japan: The Colonized Peoples in Japanese Jury Courts

Chapter 5. The Occupation Years: Attempts to Introduce the Jury System

Historical Background: The Developments in the Legal System in the Immediate Post-War Period

The Jury System in Okinawa under the U.S. Occupation

Historical Background: The Developments in the Legal System in the Post-Occupation Period

The Background to the Adoption of the Lay Judge Act

The Lay Judge Act: A Summary

The First Six Years of the Functioning of the System

Why Was the Jury System Introduced (or Ended Up not Being Introduced) at Different Times in Japan’s History?

What Were the Determinants of Success and Failure of Japan’s Past Experiences with the Jury System and How Does the Lay Judge (Saiban’in) System Fare with regard to These Parameters?

A Summary of Findings: Revisiting the Two Approaches to Analyzing Legal Change

Anna Dobrovolskaia is an independent scholar currently based in Tokyo, Japan. Her main areas of interest include the sociology of law and Japan’s legal, political, and cultural history.