The Development of the German Public Mind
Volume 2 A Social History of German Political Sentiments, Aspirations and Ideas The Age of Enlightenment 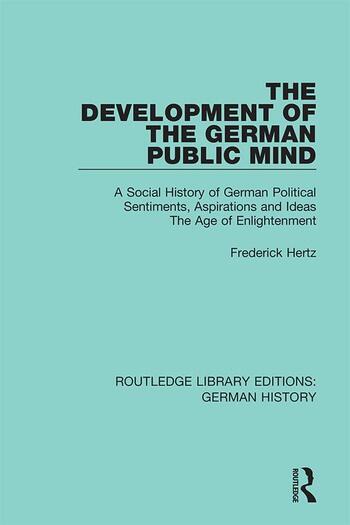 The Development of the German Public Mind: Volume 2 A Social History of German Political Sentiments, Aspirations and Ideas The Age of Enlightenment

Originally published in 1962, the second volume of how the psychological structure of German politics evolved deals with the age of monarchical absolutism and intellectual enlightenment, i.e. the last one and a half centuries of the Roman-German Empire. It traces the political principles which inspired the leading statesmen, the advocates of reforms and their adversaries, as well as the various social groups. This is a history of ideal and ideologies, of public opinions and of the ideas which a people holds of itself and other peoples and vice versa. It paved the way for an unprejudiced view of nations by comparing their thought and actions under comparable circumstances and investigating parallels and differences from a sociological point of view.

1. The Empire, its Frontiers and Structure and the Spirit of Particularism 2. The Emperor and the Estates 3. Religion and Enlightenment 4. Germany’s Social Structure and Economic Conditions 5. Political Thought in the 187th Century 6. G. W. Leibniz 7. The Epoch of Louis XIV and the Rise of Monarchical Absolutism 8. The Conquest of Hungary by the Turkish Empire and its Consequences 9. Emperor Leopold I and his Policy 10. Hungary’s Liberation and Austro-Hungarian Relations 11. The War of the Spanish Succession and its Consequences 12. Emperor Charles VI 13. The Principal German States Until about 1740 14. Christian Wolff and Enlightenment 15. Prussia Becomes a Great Power 16. Frederick II, his Personality, Thought and Work 17. Maria Theresa and Joseph II. Their Personality, Thought and Work 18. The Smaller German States in the Age of Enlightenment 19. Political Ideas in the Age of Frederick II and Joseph II 20. The French Revolution and German Public Opinion 21. The End of the Empire