The Discovery of the Solomon Islands by Alvaro de Mendaña in 1568
Translated from the Original Spanish Manuscripts. Volume II 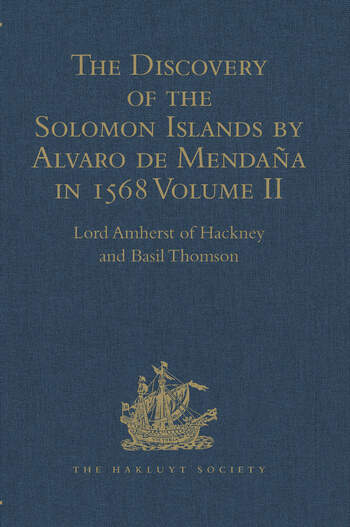 The Discovery of the Solomon Islands by Alvaro de Mendaña in 1568: Translated from the Original Spanish Manuscripts. Volume II

Continued from Second Series 8, with which it has continuous pagination. Contains three further narratives, edited with introduction and notes, including one by Gomez Catoira. This is a new print-on-demand hardback edition of the volume first published in 1901.

Contents: A brief account of what occurred upon the voyage of Alvaro de MendaÃ±a in quest of New Guinea (the anaonymous manuscript); An account of the voyage and discovery which was made in the South Sea under the command of Alvaro de MendaÃ±a as general, drawn up by Gomez Hres Catoira, chief purser, custodian of objects for barter and comptroller for His Majesty; A very particular account given to Captain Francisco de Cadres by an indian named Chipo, followed by a strange account of a ship that was driven to an island in Latitude 18 degrees along which she cruised for 50 days without finding an end of it; Index.