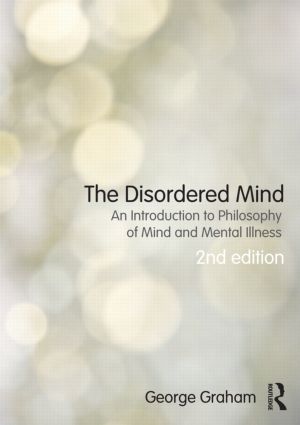 An Introduction to Philosophy of Mind and Mental Illness, 2nd Edition

Revised and updated throughout, this second edition includes new discussions of grief and psychopathy, the problems of the psychophysical basis of disorder, the nature of selfhood, and clarification of the relation between rationality and mental disorder. Each chapter explores a central question or problem about mental disorder, including:

Containing chapter summaries and suggestions for further reading at the end of each chapter, The Disordered Mind, second edition is a superb introduction to the philosophy of mental disorder for students of philosophy, psychology, psychiatry, and related mental health professions.

"This is a superb contribution to the philosophy of mind and mental illness. … anyone working in philosophy, psychiatry, psychology, neurology, or any of the related mental health professions would find it a fascinating read." - Joseph Martos, The Heythrop Journal

"…an admirably wide-ranging book that provides a rich and stimulating introduction to central topics in the philosophy of mind… The Disordered Mind should be essential reading both for those who are sympathetic and those who are antagonistic to the idea of a non-reductive notion of mental disorder. … Not only is it a welcome addition to the rapidly increasing literature on the philosophy of psychiatry, but it also contributes to establishing its legitimacy as a sub-discipline of philosophy." - Somogy Varga, MIND

"George Graham has a longstanding reputation as a distinguished philosopher of psychiatry, and The Disordered Mind shows why. Its scope is broad and its presentation is clear and precise. It is a very impressive statement of a widespread and important philosophical perspective on mental illness, which everyone studying the philosophy of psychiatry will want to read … It is clear enough, and vividly enough written, to be assigned fruitfully to undergraduates, but it also makes enough contributions to the central debates in the field to be important for specialists." - Dominic Murphy and Gemma Smart, Notre Dame Philosophical Reviews

"George Graham is contemporary philosophy’s most gifted and humane writer. The Disordered Mind is a wise, deep, and thorough inquiry into the nature of the human mind and the various "creaks, cracks, and crevices" into which it is prone sometimes to wander… The Disordered Mind is a pedagogical, philosophical, and psychiatric tour de force." - Owen Flanagan, Duke University, USA

"The book is a success, it is consistently insightful and humane, and conveys a clear understanding not only of relevant philosophical topics, but also of a much more difficult issue, the relevance of those topics to understanding mental illness." - Philip Gerrans, University of Adelaide, Australia

"What Professor Graham's book does in effect is to provide a systematic overview of all of the issues surrounding the concept and theory of mental illness and thereby the central notions embedded in our mental health practices. Moreover, he performs this task with the utmost insight, wealth of knowledge, careful and detailed argumentation, brilliance and clarity of articulation that is certain to make this book a classic that will open the door for a dynamic and fruitful exchange between the two great fields of mental health and the philosophy of mind.

The Disordered Mind is a must read for anyone who is a psychiatrist, psychologist, philosopher, neurologist, or mental health worker. Indeed, it is a must read for any thoughtful person who simply desires to understand more deeply and more realistically the workings of their own mind as well as the workings of the human mind in general." - Richard Garrett, Bentley University, USA

George Graham is Professor of Philosophy and Neuroscience at Georgia State University, USA. He is the author, co-author, or co-editor of more than a dozen books, including When Self-Consciousness Breaks (2000), Reconceiving Schizophrenia (2007) and the Oxford Handbook of Philosophy and Psychiatry (2013).