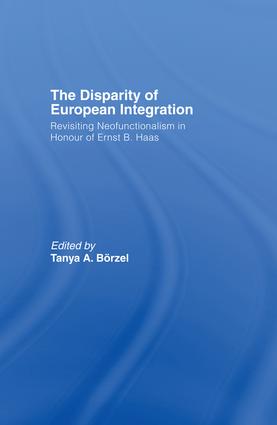 The Disparity of European Integration

Revisiting Neofunctionalism in Honour of Ernst B. Haas, 1st Edition

This new study revisits the work of the late Ernst Haas, assessing his relevance for contemporary European integration and its disparities.

Today, a second Treaty of Rome may lay the foundation for a European Constitution that embeds the Common Market in a European polity. Unfortunately, Haas will not be able to witness this path-breaking step in the development of a European political community, which he so aptly theorized almost five decades ago. This is all the more regrettable since students of European integration are more than ever challenged to tackle a major empirical puzzle: After 50 years of European integration, the member states managed to adopt a single currency and to develop common policies and institutions on justice and home affairs. The integration of foreign policy and defence, by contrast, is still lagging behind. This text delivers sharp insights into these issues.

This book, previously published as a special issue of the Journal of European Public Policy, will be of great interest to all students and scholars of international relations, the European Union, European politics and Public Policy.

The Uniting of Europe and the Foundation of EU Studies: Revisiting the Neofunctionalism of Ernst B. Haas, Philippe Schmitter, European University Institute

The European Constitutional Compromise and the Legacy of Neo-Functionalism, Andrew Moravcsik