The Early Wittgenstein on Metaphysics, Natural Science, Language and Value 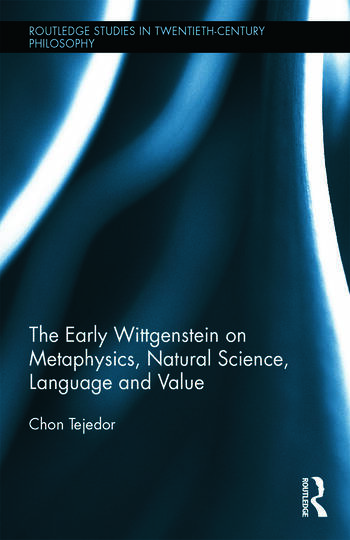 The Early Wittgenstein on Metaphysics, Natural Science, Language and Value

This book advances a reading of Wittgenstein’s Tractatus that moves beyond the main interpretative options of the New Wittgenstein debate. It covers Wittgenstein’s approach to language and logic, as well as other areas unduly neglected in the literature, such as his treatment of metaphysics, the natural sciences and value. Tejedor re-contextualises Wittgenstein’s thinking in these areas, plotting its evolution in his diaries, correspondence and pre-Tractatus texts, and developing a fuller picture of its intellectual background. This broadening of the angle of view is central to the interpretative strategy of her book: only by looking at the Tractatus in this richer light can we address the fundamental questions posed by the New Wittgenstein debate – questions concerning the method of the Tractatus, its approach to nonsense and the continuity in Wittgenstein’s philosophy. Wittgenstein’s early work remains insightful, thought-inspiring and relevant to contemporary philosophy of language and science, metaphysics and ethics. Tejedor’s ground-breaking work ultimately conveys a surprisingly positive message concerning the power for ethical transformation that philosophy can have, when it is understood as an activity aimed at increasing conceptual clarification and awareness.

Introduction: The Status of the Tractatus  1. An Essence to Logical Representation  2. Dissolving the Subject: Solipsism, Mind and the Self  3. Psychology, Philosophy and the Mechanistic Approach of Metaphysics  4. Causation and the Principles of the Natural Sciences  5. On the Relative Position of Logic, Science and Natural Languages  6. The Ethical Purpose of the Tractatus.  Conclusion: Wittgenstein's Method and the Continuity in his Philosophy

‘Chon Tejedor’s fascinating study of the Tractatus focuses on aspects of the text that tend to be unduly neglected, including Wittgenstein’s treatment of metaphysics, value, and natural science. But what is perhaps most distinctive about her book is the way in which she views Wittgenstein’s treatment of philosophy itself, namely as having a significant ethical dimension. Her book is both provocative and perceptive. It is also written with clarity, force, and imagination. There is much here to captivate not just anyone with a specialist interest in the Tractatus, but anyone with an interest in philosophy.’ —Adrian W. Moore, University of Oxford

'Chon Tejedor has produced an enthralling study of the Tractatus Logico-Philosophicus, in which neglected aspects of that text (such as Wittgenstein’s account of the natural sciences) are brought to prominence, and a novel interpretation of the book’s ‘ethical purpose’ is advanced. All those with an interest in the philosophy of Wittgenstein will find much to ponder in this engaging, lucid work.’ —Brian R. Clack, University of San Diego

‘This is a ground-breaking work within Wittgenstein studies. Tejedor offers a new interpretation of Wittgenstein’s Tractatus Logico-Philosophicuswhich cuts across the metaphysical, resolute, and elucidatory readings of the book. The uniqueness of Tejedor's position lies in her metaphysically neutral and ethically endowed understanding of conceptual clarification as involving practical understanding and ability. This is post- New Wittgenstein at its very best: a reading that draws careful insight from that debate and then moves beyond it. I cannot recommend it highly enough.’  —Constantine Sandis, Oxford Brookes University.

‘In her new work, Chon Tejedor gives a wide-ranging exposition of Wittgenstein’s treatment of central questions in metaphysics, the philosophy of science and ethics as presented in his early writings, especially in his Tractatus Logico-Philosophicus. Tejedor’s study is an original contribution to Wittgenstein research: it comprises a lucid reading of the most difficult parts of the Tractatus and combines an exceptionally clear exposition of this reading with an historically informed, perspicuous account of central philosophical questions raised by this enigmatic book.’  —Joachim Schulte, University of Zürich.

‘Despite the extraordinary amount of attention it has received, the interpretation of the Tractatus is still a matter of fierce disagreement and it is certain that nobody has yet produced a crystal-clear interpretation of the work that is true to the text and explains all, not merely some, of the problematic features of the work. Tejedor's book is outstanding in that it aims to do just this, testing each possible interpretation against every shred of possible evidence, never resting content with an interpretation unless she can show both that alternative interpretations are defective and that there is good reason to embrace the favoured interpretation.’  —Malcolm Budd, University College London