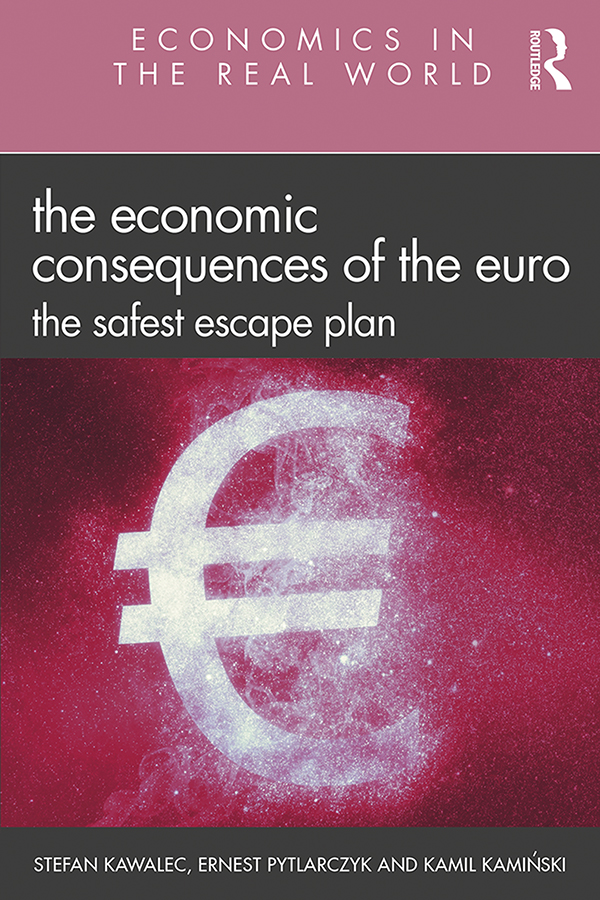 The Economic Consequences of the Euro

This book presents a new narrative on the eurozone crisis. It argues that the common currency has the potential to kill the European Union, and the conventional wisdom that the eurozone can be fixed by a common budget and further political integration is incorrect.

The authors address key questions such as why the European Union and the single market have been successful, why the common currency poses a threat to European integration, and whether it is possible to either fix the eurozone or dissolve it while keeping the EU and the single market. Contrary to the view that it would be best if the Southern European countries left the eurozone first, the book makes the case that the optimal solution would be to start the process with the most competitive countries exiting first. The authors argue that a return to national currencies would be beneficial not only to the crisis-ridden southern countries, but also to France and Germany, which were the main promoters of the single currency. An organised unwinding of the euro area would be beneficial both for the European economy and for Europe’s main trading partners.

The authors contend that to defend the euro at all costs weakens the European economy and threatens the cohesion of the European Union. If pro-European and pro-market EU leaders do not dismantle the eurozone, it will most likely be done by their anti-European and anti-market successors. If that happens, the European Union and the common market will be destroyed.

This book will be a useful and engaging contribution to the existing literature in the fields of macro, monetary and international finance and economics.

"The authors cast clear and revealing light on the painful dilemmas posed by the single currency for the countries that use it. Their book builds on previous contributions to this debate by showing not only why the Euro is unsustainable but also, and more fundamentally, how the Euro should be dismantled. In one of their more striking arguments, the authors draw a parallel between the constraints imposed on present-day European economies by the Euro and the effects of the gold standard in the interwar period, highlighting the dangers of such an exchange rate regime for European democracies. This book contains a powerful warning about real dangers and constructive proposals for avoiding them." — Brigitte Granville, Professor of International Economics and Economic Policy at Queen Mary University of London

"This book is a sensation for three reasons:

First, it demonstrates how detrimental the euro is to Europe and the EU. Stefan Kawalec, Ernest Pytlarczyk and Kamil Kamiński deal with this subject without the usual ideological background music.□

Secondly, like a medical team, they not only provide a diagnosis and a prognosis (for what will happen if nothing is being done about it), they prescribe a medicine, the patient being the Eurozone. These authors come up with what is by far the most realistic and the least disruptive way out of the Eurozone.

Thirdly, the book has been written by distinguished highly competent economists, from a country which is not a member of the Eurozone. This book will surely help avoid the Poles losing their monetary and economic independence by making the same mistake as the Austrians, the Germans and the Dutch did. But most importantly the book may help existing Eurozone members and the whole EU to exit the euro trap. That’s why this book should be widely circulated in all EU countries. It is not the first time, Poles teach Western Europeans a lesson in freedom." — Hans-Olaf Henkel, Former President of the Federation of German Industry – BDI (1995–2000). Former President of the Leibniz Association and former CEO of IBM Europe

"This book should be required reading for European economic policymakers wishing to avoid another lost European economic decade. In a highly readable and timely manner, it provides a well-researched and insightful diagnosis of the Eurozone’s economic malaise. More welcome yet, it provides a thought provoking and persuasive plan for Europe to exit its Euro trap. European policymakers would ignore this book’s constructive exchange system proposals at their peril." — Desmond Lachman, Resident fellow at the American Enterprise Institute. Former deputy director in the International Monetary Fund’s Policy Development and Review Department

"In distinguishing between productivity and competitiveness the authors have provided a very rigorous analysis of the role of currency adjustments in modern history, and of why the existence of the euro will make it nearly impossible for European economies to adjust without incurring severe social and political costs. This is an important book that should be read by any European policymaker or citizen interested in the role of the euro in domestic and EU-wide policymaking." — Michael Pettis, Senior Fellow at Carnegie-Tsinghua Center. Professor of Finance and Economics at Peking University

"Building on their work on Controlled Dismantlement of the Eurozone, published in 2013 in the German Economic Review, the authors explore the consequences of an unpleasant truth that is increasingly hard to conceal: the Eurozone is not an optimal currency area, and there is no such thing as an ‘endogenous optimum currency area’. The long-run consequences of real exchange rate misalignment on productivity growth, an obvious consequence of preventing nominal exchange rate adjustment, are putting European countries on diverging trajectories. It is now up to contemporary politicians to understand that the economic unsustainability of the single currency cannot and should not be addressed through politically unsustainable measures (ranging from restricting freedom of speech on these issues to addressing imbalances through austerity policies). Kawalec, Pytlarczyk and Kamiński's book provides a way out of this trap: dismantling the Eurozone starting from the more competitive countries. Far from being a mere provocation, this proposal should be considered seriously by European governments as a precious opportunity to manage an unavoidable outcome." — Sen. Alberto Bagnai, Associate Professor of Economic Policy, Head of the Treasury and Finance Committee, Senate of the Italian Republic

Part II: The significance of national currencies and exchange rate adjustments. 4. Loss of international competitiveness and inability to restore it as a source of the problems of the eurozone’s depressed economies 5. International competitiveness should not be confused with productivity 6. Currency weakening compared to deflationary policy: Two alternative scenarios for restoring international competitiveness 7. The meaning of exchange rate adjustments (bike trip example) 8. The tragic experience of the defence of the gold standard through deflationary policy during the Great Depression 9. Devaluations that allowed countries to escape from crises in the post-war period 10. The cases often presented as the evidence of effectiveness of the internal devaluation 11. Controversies surrounding devaluation

Part III: Can Europe compensate for the lack of national currencies? 12. The search for solutions that will repair and strengthen the eurozone 13. Can fiscal union deliver the tools to improve threatened countries’ competitiveness? 14. What could a more flexible labour market deliver? 15. Can a fiscal union protect eurozone members from future problems with competitiveness? 16. The US, nation states and underdeveloped regions, and the ability of a single currency to function in Europe 17. The optimum community level for a single currency

Part IV: What are the consequences of defending the Euro at all costs? 18. The threat to European integration 19. Conflicts with trading partners

Part V: How to return to national currencies, while preserving the European Union and single market? 20. The euro trap 21. The way out of the euro trap: Germany should leave first 22. The main elements of the strategy for a coordinated euro break-up 23. Impact of the proposed strategy on risks associated with segmentation of the eurozone 24. The special role of the ECB during the transition period 25. The ability to cope with banking and debt crises 26. A new currency coordination system in Europe 27. Europe avoids conflicts with trading partners; Germany avoids a hard landing 28. Who can initiate the dissolution of the eurozone? 29. A new Bretton Woods. Conclusion.

Stefan Kawalec is the CEO of Capital Strategy, a strategy consulting company in Poland, and a co-founder of the European Solidarity Manifesto.

isthe chief economist at mBank S.A., one of the biggest commercial banks in Poland and a subsidiary of Germany’s Commerzbank.

is an advisor to the CEO of PKO Bank Polski S.A., Poland’s biggest commercial bank.

Economics in the Real World