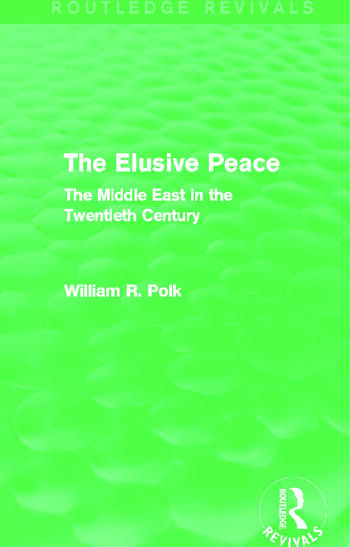 The Elusive Peace (Routledge Revivals): The Middle East in the Twentieth Century

The Elusive Peace, first published in 1979, highlights the crucial developments in the Middle East during the twentieth century: the coming of nationalism, the struggle for independence, the effects of the Cold War and the four ‘hot wars’ in the Middle East. The numerous attempts to solve the conflicts, and the ultimate failure of such attempts, are discussed with particular reference to the war in Lebanon, and its relation to larger conflicts. As an American emissary during the Kennedy, Johnston and Nixon years, William Polk is unique in his ability to assess the key personalities and provide thorough analysis, considering Sadat and Begin, and the American policies of Dulles and Kissinger. This is a fascinating and inclusive study which provides essential background to the on-going turmoil in the Middle East.

Introduction;  Part I  1. Memories of the Past  2. The Rise of Nationalism  3. The Struggle for Independence  4. The Growth of Capacity;  Part II  5. The Cold War  6. Hot Wars  7. American Diplomacy  8. Lebanon and Palestine  9. Begin and Sadat;  Part III  10. Potential for the Future  11. Conclusion;  Appendix A: The Camp David Agreement;  Appendix B: Framework for an Egypt-Israel Peace Treaty;  Appendix C: Treaty of Peace between the State of Israel and the Arab Republic of Egypt;  Appendix D: Memorandum of Agreement on Assurances signed by the U.S. Secretary of State Mr Cyrus Vance, and the Israel Foreign Minister, Mr Moshe Dayan, on 26 March 1979;  Index; Bibliographical Note

"William Polk, a professional in history and diplomacy … manages to simplify without distorting the region’s problems of war and peace, of wealth and poverty, and of adaptation to the modern world, setting them against a background of political and cultural history" – Foreign Affairs