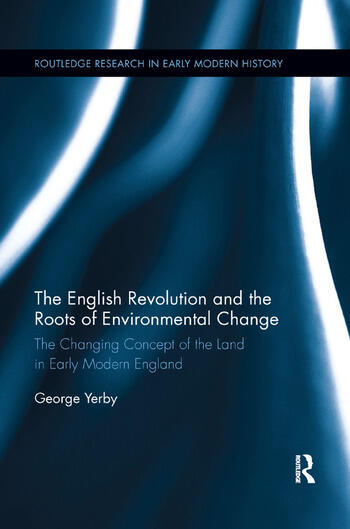 The English Revolution and the Roots of Environmental Change: The Changing Concept of the Land in Early Modern England

This study brings a new perspective to a pivotal debate: the causes of the English Revolution. It pinpoints the economic motives behind the opposition to the crown, and shows their connection to the changing mind-set and political transitions of the time. Distinctively, it identifies the radicalism of the mercantile sphere, and the developing claim of "freedom of trade," the basis on which parliament challenged the king’s fiscal prerogative. Freedom of trade was associated with rights of consent, which were asserted as a guarantee of economic interests, and as a political principle. This informed the constitutional changes pushed through by parliament early in 1641, establishing freedom of trade by parliamentary control of the customs, and giving the assembly an automatic place at the center of affairs, the first requirement of representative government. Crucially, it was not the crown but parliament that appropriated the state interest, through an independent definition of national priorities. As England coalesced into a political and commercial unit, the open and communal patterns of medieval times were overlaid. The land itself came to be perceived and used in a different way. Freedom of trade had an agrarian aspect. An extended class of gentry and yeomanry occupied consolidated farms, displacing the smallholders from the common lands. With intensified marketing, the old moral restraints on trade and property died away. A more exploitative ethic undermined the balance of relationship with the land. The book makes an original connection between the English Revolution and the processes of environmental change.

Introduction: The Changing of the Open, Communal Land into a National, Commercial Land, and the Neglect of Economic Effects: Is the Environment History?  Part One: The Close of the Universal World of Medieval England  1. The Light Touch of Communalism on the Land, and the Openness of the Medieval World  2. The Dismissal of the Saints, and the Disappearance of the Universal Church  3. The Reordering of the Physical and Intellectual Spheres  4. "The Exceeding Lucre That They See Grow": Higher Profits, and a Heightened Sense of Property  5. Enclosure and Consolidated Holdings: The Break-up of the Communal System  6. The Basis of Improvement  7. The Changing Face of the Land, and the "Great Bravery of Building which Marvellously Beautified the Realm"  Part Two: The Consolidation of a Political Nation  8. The Definition of the State, and the Developing Structures of National Administration  9. The National Expansion of the Middling Sort, and the Relevance of the Rise of the Gentry  10. "The Authority of the Whole Realm": Parliamentary Law as the First Principle of Representative Rights, and National Sovereignty  11. Freedom of Trade as a Developing Principle: The Assertion of Absolute Property Against Prerogative Impositions  12. Parliament as a Point of Contact Between the Constituencies: The Emergence of a Freestanding National Interest, and Roots of English Liberty  13. The Elizabethan Nation: "The Envy of Less Happier Lands"  14. The Foreign Foreign Policy of James I  15. "A Declaration of the State of the Kingdom": The National Imperatives that Necessitated Automatic Parliaments, and the Triumph of Freedom of Trade  16. The Commercial Landscape: "How Wide the Limits Stand Between a Splendid and a Happy Land."  Conclusion: The Limits of the Commercial Land: Is the Environment History?

George Yerby took his degree at Birkbeck College, London University in 1986, and has since worked as an historical researcher. He specializes in the economic and political history of the sixteenth and seventeenth centuries. He is author of People and Parliament: Representative Rights and the English Revolution, published in 2008.

"This is an important and in one respect highly original work. It will make a significant contribution to the debates on the English Revolution and the transition to capitalism. What is particularly impressive here is the way Yerby establishes connections between issues that are usually treated separately from the core themes, such as the effect of the Reformation on individual perceptions of the landscape, or how the concept of "the nation" went from being a merely territorial concept to one embodying a new political idea."

"Yerby has written a complex, insightful, and challenging book. His major premise is that 16th/17th-century England experienced a change from a communal relationship with the land to one of personal ownership and the individual right to manipulate and exploit the land. This led to increased wealth, a widening gap between rich and poor, ultimately to the Industrial Revolution, and through this unbalanced relationship with the land, to the destruction of the environment today through the rise of carbon dioxide in the atmosphere."

"George Yerby expertly chronicles the transformation of England's economic, social, political and religious life from the medieval period to the seventeenth century. In doing so, he renews an older historiographical tradition that stresses the economic causes of political change."