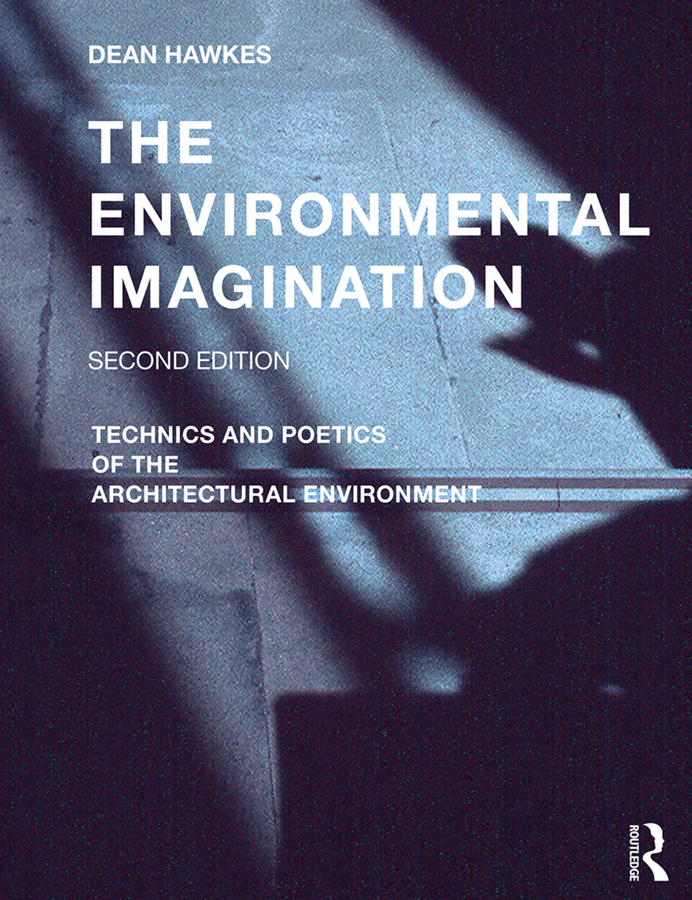 Technics and Poetics of the Architectural Environment, 2nd Edition

The Environmental Imagination explores the relationship between tectonics and poetics in environmental design in architecture. Working thematically and chronologically from the eighteenth century to the present day, this book redefines the historiography of environmental design by looking beyond conventional histories to argue that the environments within buildings are a collaboration between poetic intentions and technical means.

In a sequence of essays, the book traces a line through works by leading architects of the nineteenth and twentieth centuries that illustrate the impact of new technologies on the conception and realisation of environments in buildings. In this, a consideration of the qualitative dimension of environment is added to the primarily technological narratives of other accounts. In this second edition, the book has been substantially rewritten and restructured to include further research conducted in the decade since the first edition. A number of important buildings have been revisited, in order to extend the descriptions of their environments, and studies have been made of a number of newly studied, significant buildings. A completely new essay offers an environmental interpretation of Luis Barragán’s magical own house in Mexico City and the earlier studies of buildings by Peter Zumthor have been gathered into a single, extended essay that includes a body of new research. On the fiftieth anniversary of the publication of Reyner Banham’s, The Architecture of the Well-tempered Environment, the book concludes with a critical tribute to that seminal text.

will appeal to academics and practitioners with interests in the history, theory and technology of architecture.

Dedication. Preface to 2nd Edition. Acknowledgements. Introduction. Part 1: From Enlightenment to Modernity. 1. Soane, Labrouste, Mackintosh: Pioneers of Environment. Part 2: The Twentieth Century Environment: Themes and Variations. 2. Le Corbusier and Mies van der Rohe: Continuity and Invention. 3. The ‘Other’ Environmental Tradition: Nordic Masters. 4. Louis I. Kahn: The Poetics of Served and Servant. 5. Carlo Scarpa: 'I wish I could frame the blue of the sky'. 6. Sigurd Lewerentz: Architecture of Adaptive Light.7. The Environmental Sensibility of Luis Barragán Part 3: Image and Environment 8. The Sheltering Environment. 9. The Environmental Imagination of Peter Zumthor. Epilogue 10. After Banham: 'I Do Not Like Pipes, I Do Not Like Ducts'. Selected bibliography. Index.

Dean Hawkes was educated at the Regional College of Art, Manchester and Clare College, Cambridge. He is emeritus professor of architectural design at the Welsh School of Architecture, Cardiff University and an emeritus fellow of Darwin College, University of Cambridge. He taught and researched at Cambridge from 1965 to 1995, where he was director of the Martin Centre for Architectural and Urban Studies at Cambridge from 1979 to 1987. In 1995 he was appointed professor of architectural design at Cardiff. Following his retirement in 2002 he returned to Cambridge as a fellow of Darwin College. He has held visiting professorships at schools of architecture in Hong Kong, Singapore, Glasgow, Huddersfield and Leicester. His research is in the field of environmental design in architecture. He is the author of numerous essays and articles in academic and professional architectural journals and his books include, The Environmental Tradition (1996), The Selective Environment (2002), The Environmental Imagination, 1st edition (2008) and Architecture and Climate (2012). His buildings, in partnership with Stephen Greenberg, won four RIBA Architecture Awards. In 2002 he was awarded a Leverhulme Emeritus Research Fellowship to study The Environmental Function of Architecture and in 2010 he receivedthe RIBA Annie Spink Award in recognition of his significant contribution to architectural education. In 2016 he was awarded an honorary Doctorate of Letters, D.Litt, by the University of Westminster.