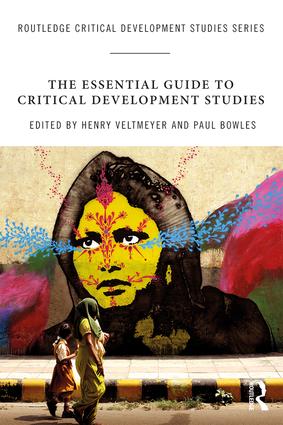 In recent years, much mainstream development discourse has sought to co-opt and neutralize key concepts relating to empowerment, participation, gender, sustainability and inclusivity in order to serve a market-driven, neoliberal agenda. Critical development studies now play a crucial role in combatting this by analyzing the systemic changes needed to transform the current world to one where economic and social justice and environmental integrity prevail.

The Essential Guide to Critical Development Studies takes as its starting point the multiple crises – economic, political, social and environmental – of the dominant current global capitalist system. The chapters collectively document and analyze these crises and the need to find alternatives to the system(s) that generate them. To do so, analyses of class, gender and empire are placed at the centre of discussion, in contrast to markets, liberalization and convergence, which characterize mainstream development discourse. Each contributor supplements their overview with a guide to the critical development studies literature on the topic, thereby providing scholars and students not only with a precis of the key issues, but also a signpost to further readings.

"This Guide invaluably fills a vacuum in the literature. Across its nearly forty chapters, it provides the highest level of scholarship and knowledge around the history, content and scope of critical development studies, covering both material and intellectual developments in a reader-friendly fashion for researchers, students and policymakers alike." – Ben Fine, Professor of Economics at the School of Oriental and African Studies, University of London, UK

"We have not reached the end of history but the story of Progress, its errors and criticisms is the most important one in social science. Here 37 experts have both charted and navigated an extensive archipelago of ideas to produce this guidebook. Not only will teachers and students find it indispensable but so also will everyone currently critical of means to the ends of the world's Sustainable Development Goals."

"The Essential Guide to Critical Development Studies, edited by Henry Veltmeyer and Paul Bowles, is the comprehensive product and theoretical culmination of some six decades of critical research on development and underdevelopment, from Paul Baran’s The Political Economy of Growth (1957) to the present. Bringing together the analyses of many of the world’s leading analysts in this area, it explains how successive waves of liberal and neoliberal developmentalism have largely failed to address the complex problems of the global South and the persistent realities of imperialism and unequal exchange. In the twenty-first century these issues have proven more important than ever, making this volume an invaluable contribution to the understanding of the epochal crises and global transformations taking place in our time." –

"the book is highly recommended for activists, researchers, students and teachers of international development at all levels, especially those who seek a comprehensive and authoritative guide to central themes, theories and research in critical development studies. The book’s theoretical diversity and high-profile contributors, alongside its wide-ranging scope, emancipatory goals and use of accessible language, make it an excellent candidate as a textbook and an essential addition to any collection of work on critical development studies." – Efe Can Gurcan, Canadian Journal of Development Studies / Revue canadienne d'études du développement, 2018

I. Reflections on History

Chapter 5. Postdevelopment and other critiques of the roots of development Eduardo Gudynas

Chapter 14. Gender inequalities at work: explanations with examples from Cambodia, the Philippines and China Fiona MacPhail

Chapter 21. The making of the migrant working class in China Pun Ngai

VII. Resources, Energy and the Environment

IX. The BRICS as the new ‘development giants’

Chapter 31. Brazil: from the margins to the centre? Ana Garcia and Miguel Borba de Sá

Chapter 33. Interrogating the China model of development Alvin So and Yin Wah Chu

X. The Search for a New Model: Rethinking development in Latin America

Chapter 37. Confronting the capitalist hydra: the Zapatistas reflect on the storm that is upon us Sergio Rodriguéz Lascano

Paul Bowles is Professor of Economics and International Studies at the University of Northern British Columbia, Canada.

The global crisis, coming at the end of three decades of uneven capitalist development and neoliberal globalization that have devastated the economies and societies of people across the world, especially in the developing societies of the global south, cries out for a more critical, proactive approach to the study of international development. The challenge of creating and disseminating such an approach, to provide the study of international development with a critical edge, is the project of a global network of activist development scholars concerned and engaged in using their research and writings to help effect transformative social change that might lead to a better world.

This series will provide a forum and outlet for the publication of books in the broad interdisciplinary field of critical development studies—to generate new knowledge that can be used to promote transformative change and alternative development.

The editors of the series welcome the submission of original manuscripts that focus on issues of concern to the growing worldwide community of activist scholars in this field.