The Etchings of Wilfred Fairclough 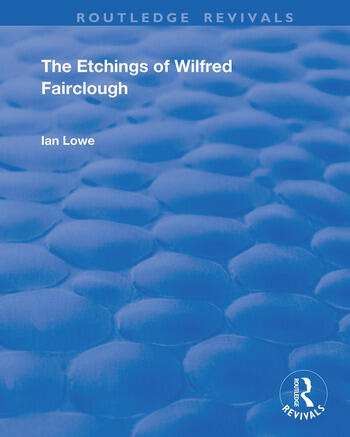 The Etchings of Wilfred Fairclough

First published 1990, this volume consists of an introductory essay by Ian Lowe and a comprehensive catalogue of all Wilfred Fairclough’s prints, some 140, from 1932 to the present (1990). Al the prints are illustrated in the body of the catalogue for ease of identification and 48 are also reproduced as large format duotone illustrations.

From the Royal College of Art, Wilfred Fairclough won the Rome Scholarship in Engraving in 1934 and was elected an Associate of the Royal Society of Painter-Etchers and Engravers in the same week. His engravings, inspired by his travels in Italy, Spain and Germany in the 1930s, were succeeded by etchings of British subjects and topography, notably of Oxford, until, with a Leverhulme grant, he returned to Italy in 1961. Increasingly, thereafter he has found his subjects and his inspiration in Venice, in concerts, restaurant interiors, and the Carnival, and in Lucerne, in markets and the human figure. Wilfred Fairclough has exhibited consistently at the Royal Society of Painter-Etchers and Engravers and at the Royal Academy (where his most recent Venetian subject, Venice Carnival. Clowns, sold out in three days). Now aged 83 he is still working. There has been no slackening off in his productivity nor in the quality of his work since he retired from teaching at the Kingston College of Art in 1972. The Catalogue is based on his own meticulous records. It will be an essential source of information for all who are interested in his work as a printmaker.

Elected an Honorary Member of the Royal Society of Painter-Etchers and Engravers in 1975, Ian Lowe worked in the Ashmolean Museum in Oxford from 1962 until 1987. There he was responsible for the collection of nineteenth- and twentieth-century British prints. He arranged and catalogued numerous exhibitions including those devoted to ~F.L. Griggs, R.S. Austin, Robin Tanner, Alan Gwynne-Jones and Richard Shirley Smith. His association with Wilfred Fairclough dates from 1974. His introductory essay is both biographical and an appreciation of Fairclough’s achievement as a printmaker. It is based on their correspondence, lectures, and meetings as well as on the study of the archives and records of the last sixty years.