The Ethics of Military Privatization
The US Armed Contractor Phenomenon 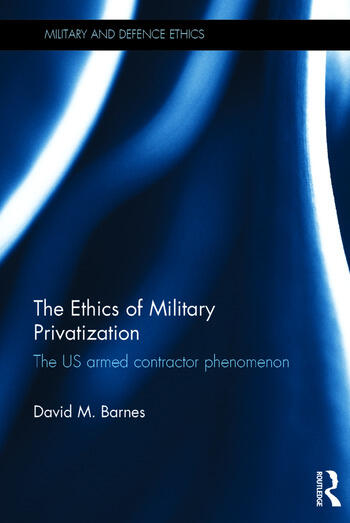 The Ethics of Military Privatization: The US Armed Contractor Phenomenon

This book explores the ethical implications of using armed contractors, taking a consequentialist approach to this multidisciplinary debate.

While privatization is not a new concept for the US military, the public debate on military privatization is limited to legal, financial, and pragmatic concerns. A critical assessment of the ethical dimensions of military privatization in general is missing. More specifically, in light of the increased reliance upon armed contractors, it must be asked whether it is morally permissible for governments to employ them at all. To this end, this book explores four areas that highlight the ethical implications of using armed contractors: how armed contractors are distinct from soldiers and mercenaries; the commodification of force; the belligerent equality of combatants; and the impact of armed contractors on the professional military. While some take an absolutist position, wanting to bar the use of private military altogether, this book reveals how these absolutist arguments are problematic and highlights that there are circumstances where turning to private force may be the only option. Recognising that outsourcing force will continue, this book thus proposes some changes to account for the problems of commodification, belligerent equality, and the challenge to the military profession.

This book will be of interest to students of private security, military studies, ethics, security studies, and IR in general.

2. The Armed Contractor Phenomenon: A Contemporary Debate with a Long History

4. Armed Military Privatization and the Commodification of Force

5. The Belligerent Equality of Armed Contractors?

6. The Challenge of Military Privatization to the Military Profession

David M. Barnes is a career US Army officer and Assistant Professor at the United States Military Academy. He has a PhD in Philosophy from the University of Colorado, USA.