The Ethics of War and Peace
An Introduction 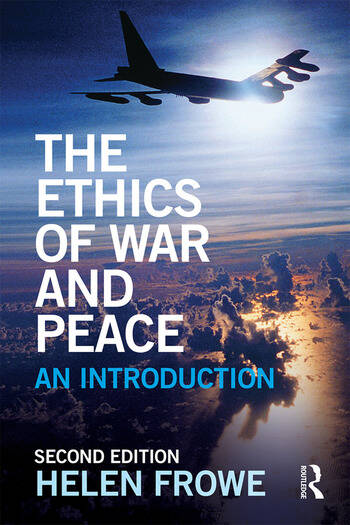 The Ethics of War and Peace: An Introduction

The Ethics of War and Peace is a lively introduction to one of the oldest but still most relevant ethical debates. Focusing on the philosophical questions surrounding the ethics of modern war, Helen Frowe presents contemporary just war theory in a stimulating and accessible way.

This 2nd edition includes new material on weapons and technology, and humanitarian intervention, in addition to:

Each chapter uses examples and concludes with a summary, discussion questions and suggestions for further reading to aid student engagement, learning and revision. The glossary has been expanded to cover the full range of relevant terminology.

This is the ideal textbook for students of philosophy and politics approaching this important area for the first time.

Helen Frowe is Wallenberg Academy Research Fellow in Philosophy at Stockholm University, where she directs the Stockholm Centre for the Ethics of War and Peace.

Praise for the previous edition:

'The Ethics of War and Peace is an ideal introduction to debates in contemporary just war theory. It is accessible, lucid, and comprehensive in its coverage of the central issues. As one of the foremost writers on the ethics of war, Frowe here not only surveys and authoritatively explains the debates but also enters them, making original, insightful, and important contributions of her own.' - Jeff McMahan, Rutgers University, USA

'This book exhibits the greatest virtue of an introductory text by demonstrating just how rich and complex a subject can be, without leaving the reader feeling alienated or unqualified to critically comment. … should be required reading on any university course on the subject and indeed for anyone with an interest in thinking clearly and deeply about war and violence.' - Jonathan Parry, Journal of Moral Philosophy

'... admirably introduces newcomers to the complex debates of contemporary philosophers whose arguments do help shape the policy and practice of warfare today. Summing Up: Recommended. Lower-level undergraduates through graduate students; practitioners and general readers.' - CHOICE

'[A] real gem ... Helen Frowe deserves to be praised for making philosophy accessible, relevant and exciting. Next time I teach a course on just war theory, this is the textbook I’ll be using.' - Vittorio Bufacchi, University College Cork, Political Studies Review

'For many years Michael Walzer’s Just and Unjust Wars provided the paradigm for philosophical thinking about the ethics of war. But this paradigm has recently come under attack, most notably from Jeff McMahan’s Killing in War … It is in this polemical context that Helen Frowe has produced this valuable survey of recent debates on the ethics of war. … Frowe’s book is an admirable introduction to the way in which the ethics of war is currently discussed by the majority of philosophers.' – Paul Gilbert, Mind

'Frowe’s book does exceptionally well in laying out the current debate between those who defend the traditional view of just war theory and those who criticize it. … By examining the debates found in Frowe’s book, readers see that the ethics of war involves a continuing dialogue that they can become part of by reading the book. … a great addition to the discourse on the ethics of war…' - Lieutenant Colonel Chris Mayer, Journal of Military Ethics

'A tour de force, which engages in a fascinating discussion of the complex moral and ethical dilemmas associated with just war theory. Especially noteworthy is the discussion of the morality of terrorism, particularly in view of the killing of Osama bin Laden. The book succeeds brilliantly in setting out the major issues involved in the contemporary debates about just war theory and in revising the orthodox school as represented by Michael Walzer.' - Robert Weiner, University of Massachusetts – Boston, USA

'This is a thorough introduction to contemporary philosophical debates relating to the ethics of war and peace that should appeal to philosophy students and may be adopted by courses in that field. It is well written and argued in a good philosophical style.' – Alex Bellamy, The University of Queensland, Australia