The Europa Regional Surveys of the World 2015
9-Volume Set 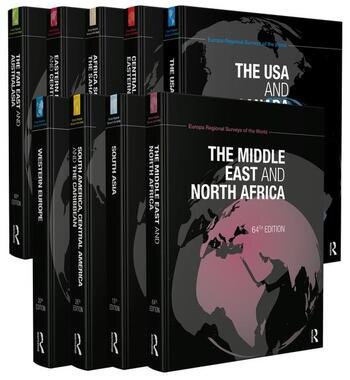 The Europa Regional Surveys of the World 2015: 9-Volume Set

The Europa Regional Surveys of the World 2015 is a timely and authoritative reference source, vast in its scope. The set consists of nine volumes, covering all the world regions, from South Asia to North America. These can be purchased individually or together.

Each volume provides a vast range of background material, statistics, directory information and expert analysis of the social, political and economic situation for each of the individual countries within that region. Whether you want to source authoritative data on copper output in Chile, or gather information on the recent uprisings in North Africa and the Middle East, the Regional Surveys can be your first port of call. Users will also find useful directory information, including email and telephone numbers, for key contacts in government, finance, tourism, etc.

Titles in the series: Africa South of the Sahara; Central and South-Eastern Europe; Eastern Europe, Russia and Central Asia; The Far East and Australasia; The Middle East and North Africa; South America, Central America and the Caribbean; South Asia; The USA and Canada; and Western Europe.

- discussion and expert analysis of elections throughout the region

- details of developments in relations with the EU for current and prospective members, and within the eurozone

- fully revised essay content, including new essays on the post-Socialist economies and on Islam in the region.

- a new essay examining gender-based inequalities in South Asian development, and a new article on the economy of Nepal

- analysis of all recent elections in the region, including the re-election of Juan Manuel Santos in Colombia and the changes of government in the Central American countries of Honduras, El Salvador, Costa Rica and Panama

- completely revised articles on political change in Latin America, violence and insecurity in Mexico, reassessing the war on drugs in Latin America and natural hazards in the Caribbean.

- extensive coverage of the ongoing conflict between Government and opposition forces in Syria, and of the political and military crisis in Iraq.

Africa South of the Sahara

- details on major news stories over the past 12 months

- new essays examining energy security in Western Europe and mainstream parties and immigration, and fully revised essays on the European Union, the economies of the eurozone, the region’s defence policies, Western Europe and emerging economies, the environment, and parties of the populist right

- analysis of recent elections in the region, including Belgium and Sweden

- details of cabinet reorganizations and new heads of state in the region.

- coverage of the parliamentary and presidential elections in Indonesia, leading to the election of Joko Widodo as the country’s next President

- analysis of the tensions surrounding China’s territorial claims in the South and East China Seas.

- an overview of the radically revised Constitution of Georgia that entered into effect in late 2013, substantially reducing the powers of the President and increasing those of the Prime Minister and the Government

- coverage of the regional elections held in many territories of the Russian Federation in September 2014.

- new essays on US and Canadian foreign policy, the Canadian services sector

Available in print and online, Europa's principal titles, The Europa World Year Book, The Europa Regional Surveys of the World, The International Who's Who and The Europa World of Learning, serve the contemporary research needs of students, academics and information-seekers in specialist and general reference libraries, government offices and commercial institutions in every country.

'This is an impressive reference work providing and impartial and invaluable guide to the politics, economy and history of the region.'

'This volume provides an excellent overview of the social and economic challenges faced by the region.

‘If one had to choose a single book for understanding the contemporary Middle East, then surely this must be that book.’ –

‘There is simply nothing else on the market that provides as much material on each of the countries of the Middle East and North Africa in one volume.’ –

‘Probably the best one-volume reference book in English on the Middle East and North Africa.’ –

‘We have praised successive issues of this work so regularly that is becomes difficult to think up new eulogies, deserved though they are.’ –

‘It is an excellent source of reference … strongly recommended for scholars, government officials and businessmen.’ –

‘You could enquire within for pretty well anything relating to the region and get an answer.’ –

Africa South of the Sahara

‘This is the most comprehensive and up-to-date guide to African countries and organizations.’

‘The best thing of its kind on the market.’

‘A Welcome addition to any library shelf.’

‘Prepared with the meticulous attention to detail which characterizes the Europa series of reference books.’

The Far East and Australasia

‘A truly valuable and impressive work.’