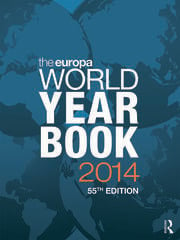 Globally renowned for its accuracy, consistency and reliability, the Europa World Year Book 2014 is your source for detailed country surveys containing the latest analytical, statistical and directory information for over 250 countries and territories.

For more than eighty years since its first publication, the Europa World Year Book has been the premier source of contemporary political and socio-economic analysis for library reference shelves, offering timely information with a global reach.

New content for 2014 includes:-  coverage of the coming to power of a transitional Government in Ukraine, following the impeachment of President Viktor Yanukovych, and the subsequent Russian annexation of the country’s Crimean peninsula

- detailed accounts of the internal conflict and escalating humanitarian disaster in Syria, and the replacement of Egypt’s elected Islamist authorities by a military-backed interim administration

- expanded and enhanced statistical coverage of the fledgling states of South Sudan and the Dutch Caribbean, and more detailed data on trade by commodities for many countries

- protests across Brazil at perceived economic and social inequalities in advance of the 2014 FIFA World Cup and the October elections, and the re-election of Michelle Bachelet to the Chilean presidency

- coverage of the rising tensions in the territorial dispute between China and Japan in the East China Sea, and details of the political crisis in Thailand

- details of the ongoing political battles in the US Congress over the federal budget deficit, and the launch of President Obama’s health care reforms;  and the preparations for the US withdrawal from Afghanistan

- the escalation of inter-religious fighting in the Central African Republic, and events leading to the appointment of Catherine Samba-Panza as the country’s new Interim President

- developments around the formation of two `grand coalitions’ in Austria and Germany, and the accession to the Italian premiership of the young former mayor of Florence Matteo Renzi

Available in print and online, Europa's principal titles, The Europa World Year Book,The Europa Regional Surveys of the World, The International Who's Who and The Europa World of Learning, serve the contemporary research needs of students, academics and information-seekers in specialist and general reference libraries, government offices and commercial institutions in every country

‘A source of reliable political, historical, economic, statistical and bibliographical information which no serious reference library may be without.’ – International Affairs

‘For scholars and journalists alike it will be an invaluable reference book.’ – The Economist

‘Has justifiably gained the reputation as the ‘definitive’ and ‘comprehensive’ source for data on every nation in the world.’ – Current History

‘The two volumes are virtually a reference library in themselves, unrivalled for their range and accuracy.’ – Reference Reviews

‘No work in the English language deals so comprehensively with education and commercial as well as political, religious, publishing and press activities in all parts of the world.’ – Daily Telegraph

‘An exceptional reference book.’ – The Bookseller