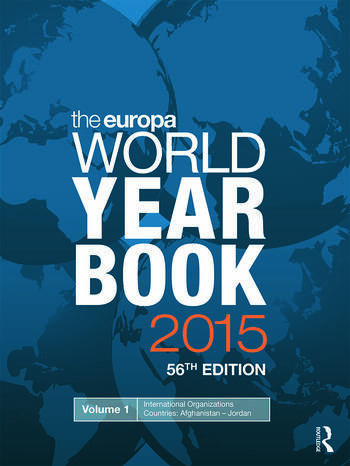 Globally renowned for its accuracy, consistency and reliability, the Europa World Year Book 2015 is your source for detailed country surveys containing the latest analytical, statistical and directory information for over 250 countries and territories, and comprehensive coverage of over 2,000 international organizations.

For more than eighty years since its first publication, the Europa World Year Book has been the premier source of contemporary political and socio-economic analysis for library reference shelves, offering timely information with a global reach.

- developments around the Israeli legislative election in March 2015, and international and regional efforts to combat Islamic State in northern Syria and Iraq

- coverage of the impact of Boko Haram terrorist attacks in Nigeria and the postponement of presidential and legislative elections, and of the ouster of President Blaise Campaoré in Burkina Faso

- details of the unprecedented anti-corruption campaign under China’s President Xi Jinping, and of Japanese Prime Minister Shinzo Abe’s successful renewal of his mandate for economic reform

- events surrounding Argentina’s technical default on its debt, and scrutiny of the 2014 presidential and legislative elections in Brazil and the second term in office of President Dilma Rousseff

- detailed coverage of the accession to power in Greece of a coalition Government of the radical left led by Alexis Tsipras, and of the election of Croatia’s first female President

- developments in Afghanistan, including the appointment of a new national unity Government and the conclusion of the NATO-led International Security Assistance Force’s 13-year combat mission

- coverage of the US mid-term elections and their repercussions, with Democratic President Barack Obama confronting an increasingly hostile political environment as the Republicans gained control of the US Senate and strengthened their position in the House of Representatives

Europa publications have long been regarded as premier reference resources, providing authoritative political and economic data for every country and region of the world, biographical profiles of the most influential global figures in every field, including politics, science, business, academia, the arts and the media, and unrivalled access to information on universities, libraries and other academic institutions worldwide.

Available in print and online, Europa's principal titles, The Europa World Year Book, The Europa Regional Surveys of the World, The International Who's Who and The Europa World of Learning, serve the contemporary research needs of students, academics and information-seekers in specialist and general reference libraries, government offices and commercial institutions in every country.

‘A source of reliable political, historical, economic, statistical and bibliographical information which no serious reference library may be without.’ – International Affairs

‘For scholars and journalists alike it will be an invaluable reference book.’ – The Economist

‘Has justifiably gained the reputation as the ‘definitive’ and ‘comprehensive’ source for data on every nation in the world.’ – Current History

‘... virtually a reference library in themselves, unrivalled for their range and accuracy.’ – Reference Reviews

‘No work in the English language deals so comprehensively with education and commercial as well as political, religious, publishing and press activities in all parts of the world.’ – Daily Telegraph

‘An exceptional reference book.’ – The Bookseller